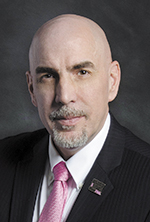 David K. Dunning drew bell curves on a legal pad as he patiently tried to explain the Hospital Star ratings released by the Department of Veterans Affairs. However, the ratings still were difficult for a visitor to understand. To start with, the ratings are not actually ratings.

"Really, it's a ranking system, not a rating system," said Dunning, the director and CEO of VA Memphis.

The VA says it issues its Star System annually "to evaluate and benchmark quality of care delivery at VA medical centers. It is designed to help VA identify best practices of its top performing hospitals and share them across its healthcare system to achieve system-wide improvements."

Although the one-star rating VA Memphis received in October did not seem like an event to celebrate, Dunning insists there is plenty to cheer about. And if a visitor to VA Memphis takes a closer look, there is indeed plenty of evidence to support Dunning's optimism.

Even starting with the Star System itself there is progress - especially considering the improvement that has been made in the last three years. The report indicates that VA Memphis made positive improvements in overall quality, with the largest gains coming in the key benchmarks: mortality, length of stay and avoidable hospital complications.

"Three years ago, of 130 VA hospitals, we were the worst," Dunning said. "Much has changed."

"VA Memphis is among the fastest improving medical centers in all of VHA," Dunning said. "Some of our biggest strides were in the areas of mental health, including suicide prevention, hospital complications and sepsis recognition. Our hospital is far safer in every aspect than we were one, two or three years ago."

The reason for the impressive improvement is Dunning himself, according to Thomas C. Ferguson, MD, the chief of staff at VA Memphis.

"While he has only been here since May, 2017, much has been accomplished since his arrival," said Dr. Ferguson, who has been at VA Memphis for 10 years.

He pointed to the addition of major new equipment that was badly needed.

"We are in the middle of installing the third of three new-generation CT scanners," he began. "We have 244 beds and every one of them is new. We have a new cardiac cath lab. And a new PET scanner is coming.

"Plus, we're getting a lot of help - personnel."

He said the hospital's culture has dramatically improved since Dunning's arrival about 17 months ago. New employees have been added as staff has increased and others, whose attitude was lacking, are no longer there.

"Our staff now is happier, more engaged and glad to be here," Dr. Ferguson said. "Things are completely different now."

Dunning, an Army veteran who reached the rank of colonel before retiring after serving 30 years and 16 days, is the first veteran in more than 30 years to take charge of VA Memphis. Dr. Ferguson believes having a veteran in charge has made a difference. Dunning, he says, has an empathy with the patients - there is a special relationship. The patients respond to him, as do the employees.

"Morale has turned around; people are more engaged and happier. The culture has changed," Dr. Ferguson said. "Employees now believe that when we say something will be done, it actually is done. For example, before, when we were promised we'd get new equipment, it never happened. We never got the funding. Staff lost confidence that things would get better. Now, when we're told we're going to get something - we do."

Again, the reason for that is Dunning. During his Army career, he was involved in finance and purchasing. He learned the art of getting what you ask for - a talent that is acquired over time when working for the government. Putting that talent to work has had a lot to do with VA Memphis getting $34-millon of badly needed new equipment since Dunning's arrival.

Plus, it was announced last month that the facility is going to get a new three-deck parking garage.

"Believe it or not, the number one complaint when I got here was parking," Dunning said. So he quickly took spaces reserved for employees and designated them for patients and visitors. At the same time he provided more parking for employees, but a bit further away from the front door. He also established free valet parking for visitors.

"This is my home now," said Dunning, who for a time lived in Tennessee while growing up. "Memphis is similar to places I've worked in the past and I believe it has true potential to be a national leader among VA Centers."

Dunning knows there have been problems and VA Memphis has had its share of criticism. But he is quick to point out the improvements, such as new equipment, increased staff and better morale, improved mortality rates, shorter hospital stays, and, of course, vastly improved parking.

He has seen the negative media reports such as a recent editorial that was highly critical. "They never came to see us," he says. "Most of the negativity is now perception."

Those people, perhaps, are looking at the stars and not at the hospital.