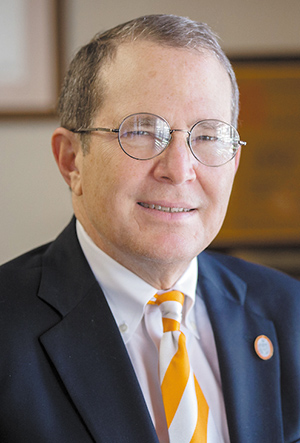 For the last decade, Steve Schwab, MD, not only witnessed impressive strides in the local medical community, but also played a significant role in that success while serving as chancellor of the University of Tennessee Health Science Center.

Now, as Schwab prepares to transition to a different role at UTHSC - he recently announced plans to retire as chancellor in 2022 and return to research and teaching - his focus is on ensuring that the school's next leader will be equally successful in attracting and producing top candidates to serve Tennessee's medical community.

"I always like to say that we're not where we need to be, but we're better than where we were," Schwab said. "Every job has a 'use life' and I've had a great experience as chancellor and I'm proud of what we've achieved. But there's more work to be done and I believe this is a good time to bring someone else in to carry on that mission."

Prior to his arrival in Memphis, Schwab was chair of the Dept. of Medicine and chief clinical officer at the Medical College of Georgia. He joined UT Health Science Center's College of Medicine 15 years ago as executive dean and was appointed chancellor in 2010. In the years since, he guided the school through an impressive growth period.

Under Schwab's leadership, UTHSC boosted its enrollment by nearly 40 percent, growing to 3,300 students and 1,400 residents. Graduation rates and overall first-attempt board pass rates climbed to 95 percent.

"[Schwab] had to be a brilliant doctor and researcher to earn his position, and he obviously is both of those," UT President Randy Boyd said in a statement. "But in the role, he has proven to also be a great strategist and great leader. He is always honest and direct, has bold vision, and gets things done."

Schwab has demonstrated both day-to-day leadership and long-range vision while in Memphis. During his tenure, UTHSC expanded its clinical partnerships across Tennessee and now boasts an integrated statewide organization across campuses in Memphis, Chattanooga, Knoxville and Nashville.

"Our four-campus system is one of the reasons we've grown our residencies and fellowships," Schwab said. "Medicine is a story of clinical rotation and after a couple years spent in Memphis, our students can traverse the state to continue their learning at any of these campuses."

The Memphis campus continues to expand to accommodate that growth, with some$300 million in construction projects that include the Translational Science Research building, the Center for Health Care Improvement and Patient Simulation, and renovations to the campus quadrangle.

Clinical revenue has also soared under Schwab's tenure, from $85 million when he became chancellor little more than a decade ago to more than $300 million today. Similarly, research funding has more than doubled and grant awards are projected to exceed $120 million this academic year.

"We're moving in an aggressive mode by building facilities, recruiting faculty and conducting research," Schwab explained. "I truly believe that our research growth is really about to start in an even more significant way."

"Partnerships change over time," Schwab said. "While it's always painful to retract and easier to expand these partnerships, we adapt to reflect our mission."

Although the partnership is expanding, the relationship between UTHSC and Regional One is longstanding. In 2014, the two organizations formed UTROP (UT Regional One Physicians) that includes more than 200 physicians and medical practitioners who provide both inpatient and outpatient care.

"Our organizations have always had a strong relationship and Dr. Schwab has tried to codify and strengthen the relationship though his advocacy for clinical research at Regional One," said Dr. Martin Croce, chief medical officer at Regional One Health. and a professor of surgery with UTHSC. "This is particularly important for UTHSC residents, who overwhelmingly say they cherish their time at Regional One. This generates a positive impact because residents who like where they're learning do a better job, and that ultimately benefits their patients, their practices and their communities."

Schwab agrees, and expects the positive impact of UTHSC on Memphis and communities across the state to continue after he steps down from his leadership post and returns to academic, clinical and research duties. The search for his successor is underway with an announcement by June, 2022, if not sooner. And Schwab is already planning for the next stage in his life.

"I'll enjoy teaching and doing more nephrology research and contributing in those areas," Schwab said. "And when full retirement comes, I'll be ready. I'm an avid kayaker and I love the outdoors and there are lots of places in Tennessee to explore. That's still up ahead a bit, but I'm looking forward to it."