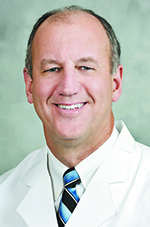 Sports medicine today looks much different than it did some 32 years ago when Dr. Barry Phillips was starting his career as an orthopedic surgeon and team doctor for high school, college and professional athletes.

Today, he says, the techniques are better, the equipment is better, and the understanding of injuries and rehabilitation is better.

There's also a term for team physicians - athlete advocates - that wasn't around in those early days of sports medicine.

"It's about putting athletes first," says Dr. Philips, who is with Campbell Clinic Orthopaedics and has been the University of Memphis team physician for the past three decades. "We have to be mindful of the athlete's physical and psychological well-being first and foremost. It's the athlete first, then the family, and then the coach and team."

It wasn't always that way. For example, getting an injured football player back into action quickly was a priority for everyone involved.

"Back in the 1990s an ACL repair and rehab was a one-year process, and then it dropped down to six months, and then 15 years ago we were trying to get them back at four to five months," Dr. Phillips says. "Now that pendulum has totally swung back the other way. So now, most of the time, it's a minimum of six months, or maybe nine months or even 12 months for a college football player. That's with the knee.

"We've learned that it's not just getting strength back, but they've got to get their agility and coordination and reflexes back. There's also the psychological part of getting hurt and getting operated on and going through rehab. It takes a lot of young people a full year or more to get back out there and really feel comfortable and forget about their injury and play again."

Dr. Phillips started out in 1987 at Campbell Clinic working with a pair of pioneers in local sports medicine - Dr. T. David Sisk who worked with University of Memphis athletic teams and Dr. Marcus Stewart who worked with teams at Ole Miss. He also did a fellowship with Dr. James Andrews of the famed Andrews Clinic in Birmingham.

"They kept me interested in sport medicine and so I stuck with it," says Dr. Phillips, who counts Dr. Barney Freeman as another important mentor. "I started out helping with University of Memphis teams and then with Team USA Baseball in Millington for about 13 years. Then I got started with the Memphis Chicks, then the Redbirds and then with major league baseball with the Cardinals at spring training."

Dr. Phillips says doctors, coaches, and trainers are working smarter today because there's a better understanding not only of how to treat an injury, but also how to avoid injury and how to prevent a reoccurrence.

Open surgery, casts, prolonged immobilization and hospital stays - the common treatment of the 1980s - has been replaced by minimally invasive surgery with much better rehab protocols.

"With better rehab, we're now able to get people back to all the goals they really want to get back to versus just being able to get back to doing some activity," Dr. Phillips says. "If you don't get them fully rehabbed, even if you have good surgery bad things happen."

Injury prevention also is far better today, he adds, with the presence of trained spotters and video analysts at football games helping trainers on the sidelines spot possible injuries such as concussions.

"We've learned a lot more about second-impact problems so instead of letting them go right back in when they seem to feel better we get them out, protect them and have them go through a concussion protocol which is continually changing," says Dr. Phillips. "Also, there's a lot less contact, particularly in spring football, so there's a less chance of getting hurt.

"If you had a 300-pound lineman two or three decades ago that was sort of a big deal, but today that's sort of the standard. The backs are bigger, too. They're all bigger. In the 80's and 90's, you had these long, drawn-out practices and that's when a lot of injuries were occurring. Now the contact is in the game and a whole lot less in practice."

Keeping young pitching elbows healthy is one area that has gotten more challenging over the years, particularly with high school pitchers who throw harder, longer and do it year round.

"Until six or seven years ago, I hadn't done surgery on kids younger than 17, but now I'm seeing a lot of kids who are 15 or 16 years old," Dr. Phillips says. "Pitching more than nine months a year and 90 pitches or more in a game puts them in an increased risk to get hurt. We're trying to get the message out that over-use is a big part of it. Sometimes taking a few months off without pitching would be helpful."

Dr. Phillips, who also works with the University of Memphis women's basketball team, says that 30 years ago ACL tears in the knees of the women were six to seven times the rate for men.

"At that time their conditioning was probably not at the same level as with the men," he says. "The good women players could play in high school and maybe not have a lot of competition, but in college they were playing at a higher level and probably hadn't developed (physically) to that same level.

"Now we work with the girls a lot on just stopping and jumping and landing. Jump programs have greatly decreased the chances of women tearing their ACL. That's been a really nice event over the last couple of decades."

But today, sports medicine is no longer just about knees and shoulders and elbows.

At this year's annual meeting of the American Orthopedic Society for Sport Medicine, Dr. Phillips and his colleagues heard a heart-wrenching talk from Maddie Kocian, one of the many U.S. Olympic gymnasts who have spoken out about years of sex abuse by team physician Dr. Larry Nassar.

Nassar was sentenced to up to 175 years in prison last year for molesting hundreds of young athletes as far back as 1972.

"Probably 99 percent of the doctors who take care of these kids only have in mind trying to make them better, but our awareness of abuse was heightened by Maddie Kocian," said Dr. Phillips. "As athlete advocates we strive to be the best we can be so the athletes can mentally and physically be the best they can be, and that is what sports are all about."