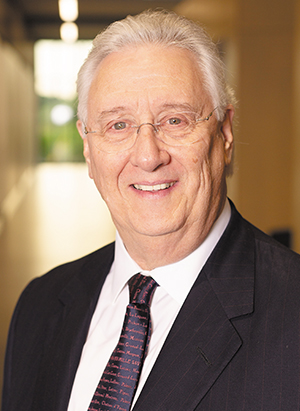 After graduation from the University of Tennessee Health Science Center College of Medicine in 1972, orthopedic surgeon Riley Jones, MD, managed to find just enough money and a few hours each week during his internship to take flying lessons.

He would seem to be an unlikely candidate to be traveling high above the operating room with single-engine, multi-engine, and instrument ratings.

"I have a fear of heights," Jones confessed. "I cannot go to the edge of something and look over without starting to get that funny feeling in my stomach, but at one time I could take an acrobatic plane and spin it and roll it over and not feel a thing because I have control of the airplane. It's really a control issue."

For some 43 years now, he has surgically restored control to patients with all manner of joint problems in their knees and shoulders. As a former small-college basketball player, Jones liked sports medicine and helping injured athletes return to competition.

As a medical student, he read a book by a New York obstetrician that had Jones thinking of that field as a career option. After helping deliver 40 babies, though, he decided he would be better at sports medicine and repairing fractures "because I could put things back together pretty well."

Today he does more work-related injuries, and generally sees older patients, including many with familiar faces.

"Some of them I've seen for more than 40 years, and in some cases, they have grandkids who are patients of mine," said Jones of OrthoSouth. "They don't want me to retire."

Much has changed in the field of orthopedics since he started his career with the former Memphis Orthopedic Group on Jan. 2, 1978, two days after completion of his residency at the Campbell Clinic.

"When I first started learning about arthroscopy, I was a resident and we were using a Japanese-designed scope that was 7.8 mm," Jones recalled. "It was like a huge trocar that you had to put into the knee and get down and look directly through the lens.

"It was bulky and cumbersome, but as science and computers improved, we began doing this with a little color TV monitor that we look up at while working inside a knee or a shoulder with 4-mm instruments, sometimes 2 mm, and using high-speed 10,000 rpm burrs to shave things. We've come a long way from opening people with incisions that are two or three inches long and having them stay in the hospital four or five days to now doing ambulatory surgery with 4mm openings and letting them go home immediately."

Total knee replacements require bigger openings to insert titanium and plastic implants that must be big and sturdy enough to support weight and handle strain. "We still put scars when we do a total knees and total hips, but just not as big," he said. "You can't quite get away from that."

Jones remembers the first total-joint implants "looked like small Tinker Toys" and required a large amount of bone cement to hold them in place. Better-fitting joint replacements can be created now and require no cement, "so we've made unbelievable changes that would last five years in the past and now lasting 15 to 20 years."

Over the past four decades, the science and technology involved in diagnosing an injury has improved as well, he says.

"When I began, we had diagnostic tools like x-rays and bone scans, but then CT (computerized tomography) came along which does a great job on bones, tumors and things like that. Then you had MRI (magnetic resonance imaging), and that opened up a whole new world for looking at soft tissue, not just for orthopedics but for all of medicine."

While surgical procedures have become more precise and less invasive, the most modern equipment and skilled medical care still have their limits.

"You still have to deal with the way God made you," Jones said. "Bone takes six weeks to heal. We haven't been able to modify that. The body hasn't changed. As I tell my patients, 'We've got just a little scar here, but on the inside, it's still going to take six weeks to heal. I can't get around that, but pray hard and maybe we can get something done.'"

Growing up in Munford, Tenn., where his father was mayor and both parents were bankers, Jones' early interests were in science and math. During his sophomore year of high school, he was selected to attend a National Science Foundation Institute program in Asbury, Ky.

The curriculum was so state-of-the-art that the course materials consisted of galley sheets for new upcoming editions of college textbooks in chemistry, biology, and physics.

Dr. Jones majored in biology at Southwestern at Memphis - which became Rhodes College in 1984 - but had no clear designs yet of becoming a physician.

"Then someone invited me to hear a pre-med talk and I said 'Yeah, I guess so,'" he recalled. "I was playing basketball and having a good time, but I went to the talk and then thought I can aim toward pre-med and if I need to change, I'll still have all the math and science so I can become an engineer or whatever. So, I ended up going to medical school.

"Going to Rhodes was the best thing that ever happened to me. I can remember the football team, and all the linemen now have a master's degree and most have doctorates. The quarterback became a dentist and two of the running backs, the center, and one of the tackles became general surgeons. We had a big tight end who's a radiologist. Everybody on the basketball team, too, has at least a masters."

Rhodes also is where he met his wife, Diana, although it took some effort and planning.

"She was coming out of French lab, and I was going in to German lab, and one of my fraternity brothers was right behind her so I asked him who she was," Jones said. "I ended up calling her without her knowing who I was, and our first date was going to be after our basketball game. So I had to have one of my friends pick her up and bring her to the game. She had to go through the school annual to figure out who I was. That was our first date. It could have been a disaster, but it worked out."

With their son and two daughters, they will celebrate their 50th wedding anniversary on Sept. 25.