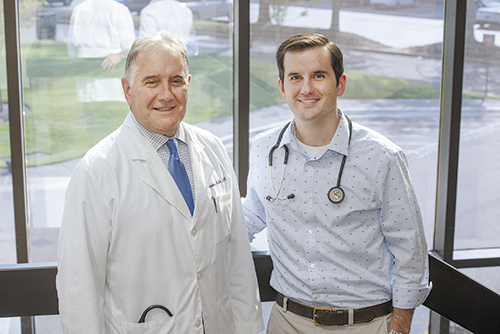 The Doctors Avila - Jeremy and his dad, Reuben

After Many Years, It's No Longer Just Internal Medicine

When Dr. Jeremy Avila completed his four-year dual residency in pediatrics and internal medicine at the University of Missouri-Kansas City last year, he was eager for the opportunity to return to Memphis to begin practicing with his father.

Equally happy was his proud father, Dr. Reuben Avila, an internist at Cresthaven Internal Medicine who says it's "a joy" having his son join the practice, although there was an initial period of concern over the pediatric part.

"Dr. (Derene) Akins and I have been in practice quite a number of years and we just do internal medicine, no pediatrics," declared the senior Dr. Avila. "We were concerned it might be too disruptive for our adult patients who are used to just other adults in the office. So we thought, 'Let's just see how he does the first year.' Jeremy was in another CMPM office and when it became apparent he didn't have a lot of babies (as patients) we thought, 'Well, this could work. We could bring him in.'

"All the patients have been very receptive, and they're excited for us as well. That's been encouraging."

Young Dr. Avila sees his dual specialties as complementing one another.

"I thought medicine was incredibly interesting and pediatrics was a lot of fun, and I didn't want to have to choose between them," he says. "I believe if you look at all of life on a spectrum, so I'm in charge from when they're born until they are in their 80s and 90s. I don't see pediatrics and internal medicine as two distinct entities as much as it's a lot of the same entities, they just look different."

For example, asthma or heart conditions in children may need lifetime attention for patients as their bodies change with age.

"Having been trained in pediatrics and internal medicine, there's no awkward transition from pediatrics to adults," says Dr. Avila, who sometimes sees entire families for office visits. "It gets a little interesting when you have four people in the room, ages 4 to 45. I don't know if I have any three-generation families yet, but that will be interesting someday. It can be pretty fun."

Despite being in the early stage of his career, Dr. Avila has noticed changes, such as the increase in specialized medications that weren't available just 10 years ago. Another change is not so much in medicine as in the patients of today and their expectations of their doctor.

"The baby boomers and the people who are a little bit older have certain expectations of their doctors whereas the younger generation - the millennials - has much different expectations," says Dr. Avila. "Serving both groups in a way that's meaningful can present a challenge. Whereas older patients value loyalty to their doctor, younger patients value accessibility. And the internet and all of its information and misinformation proves more of a challenge with younger patients, especially regarding things like vaccines."

Dr. Avila, not that far removed from the millennial generation himself, is an avid practitioner of the internet, including Facebook and the office web portal.

"The portal allows patients to message me directly," he says. "I probably have 10 conversations going on every day on the portal with patients, either explaining test results or carrying out a treatment plan just to save them an office visit. Sometimes you can type clearer than you can talk on the phone. I'm trying to go completely paperless. My father's still on paper, but our working together has gone well so far."

There are seven doctors at their Cresthaven location on Great Oaks Road in Germantown, four upstairs and three downstairs, so the doctors Avila are not in constant contact during the day.

"We don't necessarily see each other, though we pass in the hall an awful lot," says the senior Dr. Avila. "At the end of the day, though, we talk an awful lot and at lunch we'll talk and debrief. Our cases kind of bounce off of each other because he's got fresh ideas and I've got old ideas. It's fun to have him there. It's actually a joy."

Dr. Avila never actually encouraged his son to go into medicine, but preferred instead to "let him choose his own path. He's an independent man."

After being home-schooled until high school with his three siblings by his mother, Leslie, a pharmacist, young Dr. Avila attended Wheaton College near Chicago (as did his father) and majored in biology (just like his father) and attended the University of Tennessee College of Medicine (where his father did his residency.)

"He never really pushed me to go into medicine," says young Dr. Avila. "I just remember dad always talking about how much he loved his job."

The senior Dr. Avila attended medical school at Temple University in his hometown of Philadelphia and was eager to head south.

"We had some friends who were southerners and I always said when I get a chance I'm moving South. I didn't want to stay in the North. Too much snow and too many Yankees."

His son did his residency at the University of Missouri School of Medicine in Kansas City, and though he recalls only shoveling the driveway once, he was happy to return to Memphis.

He and wife Stephanie, a Nebraska native who he met at Wheaton, have two daughters, ages 4 and 3. Dr. Avila was a competitive soccer player in his earlier years, but his main link to soccer these days is following Liverpool in the English Premier League.

"I splintered my tibia one year playing soccer for Bellevue Baptist and watched the championship game on crutches," he recalls, adding that the team's victory eased the pain a bit. "Then the next year I did the same thing to my other leg playing basketball. Then I tore my PCL in college and in med school I tore both ACL's, so my sporting days are over."

So far he has received rave reviews in his practice.

His full-disclosure reply read: "Thanks for the endorsement. Apparently you trusted me enough to give me the honor of marrying your daughter."