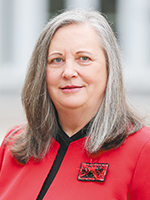 With almost three decades of service to the university, Russell has also served as the associate vice chancellor for Faculty Affairs, and holds a faculty appointment as a professor in the Department of Acute and Tertiary Care in the UTHSC College of Nursing.

Russell joined the faculty of the UTHSC College of Nursing in 1993, and practiced as an adult nurse practitioner at the Memphis Veterans Affairs Medical Center until 2000, when she was promoted to director of Distributive Programs for the college. Through the years, she has held numerous leadership positions in the college, including interim associate dean and chair of Advanced Practice Doctoral Studies.

Russell graduated from the Holzer Medical Center School of Nursing in Gallipolis, Ohio. She earned her BSN from Ohio University, a master's degree in Nursing from West Virginia University, and a PhD in Nursing Science from the University of Arizona.