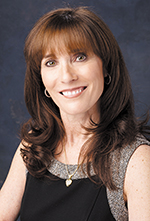 Putting the Evidence to Work for Patients

New evidence and agents have clinicians rethinking traditional approaches to treating acne, the most common skin condition in the United States affecting an estimated 40 to 50 million Americans at any given time. While the occasional pimple or breakout might not warrant a doctor's appointment, dealing with moderate to severe acne takes an evidence-based approach and the recognition that acne often takes a serious toll on self-esteem, as well as the skin.

"It can be devastating for anyone," said Linda F. Stein Gold, MD, FAAD, a board-certified dermatologist with Henry Ford Health System in Michigan and member of the American Academy of Dermatology (AAD) Board of Directors and Executive Committee. For teens and young adults, dealing with persistent acne can contribute to isolation, a decreased quality of life, anxiety, isolation and a poor self-image . . . particularly when surrounded by picture-perfect images of peers on social media.

Dr. Stein Gold said the emotional impact is very real for older acne sufferers, as well. "Don't underestimate the effect on adults with acne," she said. "For a teenager or a 20-year-old, it's acceptable to have some acne lesions. For adults, it's not socially acceptable."

It is, however, a growing problem. Although dermatologists are unsure why, an increasing number of women in their 30s, 40s and beyond are dealing with acne. The AAD estimates adult acne now affects up to 15 percent of women.

While some providers might still subscribe to the theory of just letting acne 'run its course,' dermatologists are quick to note that isn't necessarily the best advice. A growing number of options are available to effectively treat the condition, lessening both the emotional and physical scarring.

"Our thought process on acne has changed over the past few years," said Dr. Stein-Gold. Today, she explained, dermatologists are using oral antibiotics in combination with a potent topical treatment for a shorter course of time. "Before, we might have kept patients on antibiotics much longer . . . maybe a year or two. Now, we understand (antibiotic) resistance is a real problem."

She added that dermatologists are increasingly considering other hormonal therapies. "For women, we think of spironolactone or birth control pills; and for all patients, we think about going more quickly to isotretinoin."

Spironolactone is an androgen blocker used to treat hormonal acne. Isotretinoin is typically a second line treatment for cystic acne when other options have failed to yield the desired clearing. When evidence of scarring is present, Dr. Stein-Gold suggests isotretinoin be started more promptly.

"We have a number of agents in the pipeline," she added. "For the first time, we have a topical agent that looks like it can reduce excess sebum production. They've just finished Phase III trials on clascoterone. It blocks the androgen receptor; it decreases sebum production and decreases inflammation."

This first-in-class androgen receptor inhibitor by specialty pharmaceutical company Cassiopea SpA penetrates the skin to reach androgen receptors in the sebaceous glands. The 1 percent cream quickly metabolizes to cortexolone, which is found throughout human tissue, thereby minimizing any systemic side effects. In the completed Phase III clinical trials of more than 1,400 patients with moderate-to-severe acne across 112 clinical sites in the U.S. and Europe, 17.5 percent of patients assigned to clascoterone and 5.8 percent receiving vehicle cream achieved treatment success at week 12 (P<0.0001).

"The role of diet in acne has been really controversial for decades," said Dr. Stein-Gold. In the 1960s, she continued, many clinicians and researchers believed diet definitely influenced sebum production. However, diet as a contributing factor fell out of favor in the ensuing decades. "Today, we're coming back to understand diet probably does have an impact on acne," she said. "We don't have any really, really good evidence that proves diet directly influences acne, but a lot of small studies suggests that it does."

Most notably, several studies have pointed to a high glycemic diet - which includes foods like white bread, potatoes, sugar and white rice - as a potential trigger. Hyperglycemic diets increase insulin-like growth factor 1 (IGF-1) that has been shown to increase sebum production.

"There have been some studies that suggest dairy products, especially skim milk, might also be associated with acne," Dr. Stein-Gold said, adding that yogurt and cheese do not seem to have the same associative relationship to excess sebum production.

While the jury is still out on cause and effect of diet on acne, there is significant research touting the overall benefits of consuming foods with a lower glycemic load including whole grains and lentils. "You can never go wrong telling someone to eat more brown, whole grain foods," Dr. Stein-Gold said.

"Early acne can certainly be handled by a primary care provider," said Dr. Stein-Gold. "If you start to see scarring develop - and scarring can occur even in mild acne - it's time to refer."

She added, "Also, take a pulse of the patient's emotional state. The most important thing is to be empathetic with patients and listen for a few minutes."

However, Dr. Stein-Gold noted that primary care providers have to cover a lot of ground, and acne can tumble down the priority list when there are other pressing topics to address. If over-the-counter and first-line prescription options don't seem to work, or if a patient is exhibiting emotional distress over their acne, a dermatologist can explore other tailored therapies.

"With today's treatment armamentarium, there's no reason we can't get our patients clear or almost clear," Dr. Stein-Gold said.