Regional One IT Director Focuses on Underserved 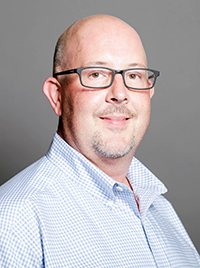 An opportunity to assist the underserved played a key role in Regional One's landing an IT Director.

Conveying vital healthcare information quickly, understandably and effectively is one way to make a positive difference in delivering appropriate healthcare. Daniel Thomas, Regional One's IT Director-Clinical and Ancillary Applications, has made it his continuing mission to improve healthcare services to an underserved patient population by supporting clinical and ancillary areas of care delivery.

A Mississippi resident since age 6, Thomas is an Ole Miss graduate who later earned a Master's in health administration (with leadership focus) from Capella University. His IT career took its turn toward healthcare shortly after college, when he was offered a job improving electronic health records (HER) workflow at a healthcare IT group.

"At one point I wanted to be a doctor," he recalled, "so this was the next best thing."

The thread of designing, documenting and implementing EHR workflow best practices to ultimately improve patient care remained consistent throughout Thomas' subsequent career at SergeMD, Inc., in Memphis and Delta Health Alliance in Stoneville, Mississippi. It's what brought him to Regional One in February 2018, to fill a vacant position directing the acute clinical and ancillary IT applications that impact in-patient care.

He said an increasing workload, changing technology and added personnel at the analyst level were the factors that influenced the hospital's decision to recruit Thomas.

"Sometimes a lot of the management will trickle up and become a little overwhelming, he said. "But they (Regional One) did a good job of managing it for the period it wasn't filled."

The position offered Thomas the opportunity to make a difference in a population he had focused on during the previous 6½ years of his career.

"I'm very interested in the underserved, the uninsured, the underinsured," he said. "That's something that this organization has a big part in, in the community."

Since February, Thomas has tackled some significant internal systems upgrades: "things required for clinical care that have been by the metrics successful"-- although he qualifies the claim with a reminder that "success in an IT world is somewhat based on perception; it's almost impossible to measure because it's all opinion."

That opinion -- and a shared perception of the metrics -- depends on a great deal of trust building between business users and information technology. Trust grows from committed relationship-building, he believes -- something he has applied to addressing his toughest challenge: taking over an existing team consisting of 14 analysts in two reporting groups. A new boss "from outside" must also work to earn his team's respect and trust, he said.

Strategically, his goal is to continue to serve the end users. "We're always looking to find new and improved ways to use technology to improve patient care that also fall within budgetary constraints," he said. "Any opportunity we can find to improve care and reduce cost is a real win for everybody. Because this organization is a non-profit, the less (money) that IT uses, the more can go to direct patient care."

"In order to succeed in leadership in IT," he said, "you have to be able to translate. Clinical teams have acronyms, IT people have acronyms, and there's a period of time where you all have to agree that you're not going to use three-letter words!"

Avoiding confusing ambiguities and translating "that intimidating geek talk" into something everyone understands is essential, he stressed.

In a world where technology evolves rapidly, keeping up can also be a challenge -- not only because major updates appear on an almost yearly basis, but also because government regulations drive many upgrades, and they're non-negotiable and time-sensitive.

That evolution, however, has also brought healthcare IT from a point when systems didn't talk to each other to today's level of interoperability, which has been dramatically improved by vendors over the past seven years, he explained.

Security concerns, too, have made comforting strides, Thomas said. "There's so much energy put into security, especially cyber security, these days. I've really been impressed with the amount of prevention I've seen over the last couple of years, especially in healthcare."

Today's breaches, he said, often arise from human error -- a laptop carelessly left in a car, a thumb drive lost -- rather than malicious mischief by a determined hacker.

Of his own accomplishments, Thomas reflected, "I'd like to think I've had a real impact in the area of healthcare where people are delivering care for the underserved; I've spent a lot of time improving access to quality healthcare in places where it just didn't exist before, and it all led me to bring what I've learned to Regional One to see if I could make the same kind of impact here, working with a bigger team that shares the passion and purpose."

Thomas enjoys spending his free time with his children ages 8 and 11, or perfecting the golf skills he's been honing since age 3 -- above-average skills that helped his high school team win a state championship.

He encourages IT healthcare leaders to pursue clearer understanding: "As IT people, we're a bit removed from the bedside aspect of care, so we have to be very focused on the needs of those end users. Try to be the ears instead of the mouth, listening to their needs and working diligently to resolve them."