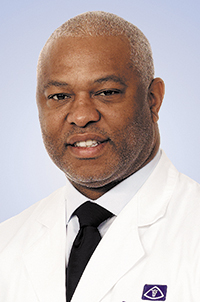 Randelon Smith Overcame Speech Impediment to Get to Med School

In a field as demanding and challenging as gastroenterology and hepatology, Randelon 'Rande' Smith followed a demanding and interesting path that led him to the staff at GI Specialists.

Dr. Smith grew up in the small Mississippi Delta town of Indianola, hampered by a speech impediment and an accompanying lack of self-confidence until a local family-practice doctor noticed some potential in him that just needed a boost.

"At that time, there was no speech therapist who could help me, so my local doctor helped me tremendously," Dr. Smith recalled. "The impact he made on me made me want to have that impact on lives like this. I can't say it was a straight path, but it was one that eventually got me there."

He went to Southern University and A&M College in Baton Rouge, La., where he was a member of the tennis team. Looking back now, Dr. Smith acknowledges that he may have spent more time on the courts than in the classroom, but he still had that goal of making an impact on lives.

"I grew up playing tennis and had aspirations of maybe becoming a teaching pro," he said. "But then I thought maybe that wouldn't be as fulfilling as practicing medicine. So I decided on grad school."

After earning his degree in biology, Dr. Smith enrolled at the University of Memphis in a microbiology masters degree program in which he accomplished several things. It made him a more focused student, gave him time to mature and created a very interesting resume.

"I developed a relationship with one of my professors based on our mutual enjoyment of tennis, which we both played at a high level," Dr. Smith said. "I needed a research project to complete graduation, and he made me an offer to join his team and I accepted. The focus was on research on catfish and voles."

His master's degree in organismal biology and ecology also included some toxicology and how it affected the environment and wildlife, and helped get him into medical school at the University of Tennessee Health Science Center.

After residency and fellowship, Dr. Smith joined GI Specialists on Aug. 1, 2011. Since then, he has seen remarkable improvements in medicine, equipment and treatment protocol.

For example, patients with hepatitis C have a much better outlook today than in years past.

"It has always been curable, but it was more difficult because treatment was longer and included painful shots with significant side effects which sometimes limited treatment," Dr. Smith said. "Cure rates were low in those who completed therapy and for those who discontinued treatment, usually because of the side effects.

"Now the duration of therapy is shorter and it can involve a single pill taken at home with less patient monitoring and side effects. In addition, the cure rates are significantly higher, however, the new medications are very expensive and there remains the issue of navigating the insurance companies who determine who gets treated."

He also notes that doctors at GI Specialists are seeing more young people with colon cancer than in previous years. Dr. Smith recommends colon cancer screening with an initial colonoscopy at age 45 for African-Americans and at age 50 for non-African Americans.

Dr. Smith said African-Americans are more likely to develop colon cancer at a younger age and to be at a more advanced stage when diagnosed, possibly related to diet, lack of exercise, rates of obesity and smoking.

"Then for both groups repeat colonoscopies or surveillance based upon the findings and the patient's family history if it applies," he added. "The age to begin screening becomes more complicated if there is a family history of colon cancer in first-degree relatives.

"The traditional risk factors are obesity, smoking, alcohol, physical inactivity and diets high in fat or low in fiber. However, we are not seeing this in many of these cases. Why? That's the million-dollar question. We don't quite know, as of yet."

"Inner-city kids may not know what it takes in terms of getting into medical school," he said. "We're hoping to start early helping these kids prepare to be good medical school candidates, and even to expose them to things they may like after medical school, such as the different specialties of medicine and medical-field opportunities beyond patient care.

"Also, we hopefully can help instill in them the responsibility to give back to the community as well as serving as positive role models."

He and his wife, Latreka, an accountant, have a son, Owen, who recently celebrated his 10th birthday with a group of friends camping in the family's backyard, and a daughter, 5-year-old Olivia, who enjoys ballet and dance.

"Owen is the cerebral kid," he said and then added with a laugh that "Olivia, she's the personality of the house."