Sports Medicine in the Midst Of a Technology Revolution 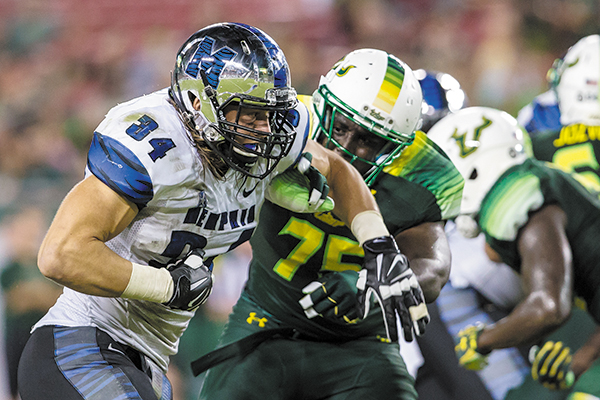 "When I started off in the early 1990s, it was the surgical part of it," said Azar, chief of staff at Campbell Clinic and team physician for the Memphis Grizzlies and University of Memphis. "The decade of the 90s was great for the ACL reconstruction, which is such a common injury in sports and with athletes at all levels."

Now, advancements in technology have taken center stage and the ramifications are being seen from center court and under center to center field and the jump circle.

Azar has followed the fast-emerging technology, which includes the use and implementation of wearable technology to assess and improve player performance and the incorporation of virtual reality to aid in rehabilitation from injury (and to assist in game preparation when injury limits on-field/on-court time).

"What's changed is the technology that's available," he said. "To me, this is probably the most revolutionary thing I've seen in my 17 years with the Grizzlies. In the last few years, it's been (wearable technology). And virtual reality is another thing that could be really neat, too.

"This technology is really the next big thing. But we don't know where it's going to take us. We really need to be careful about how we use the data."

During the NBA season, the Golden State Warriors - the league champions - relied on wearable technology to determine when certain players needed rest by measuring their movement intensity and acceleration (a player's heart rate, pulse and skin temperature can be measured on a small watch-like device worn on the wrist).

According to a story by Ken Berger of CBSSports.com, Golden State's director of athletic performance, Keke Lyles, collected data using the NBA's SportVu cameras in games and wearable technology from Catapult Sports in practice. SportVu cameras collect player movement at 25 frames per second during games, providing a detailed assessment of a player's intensity and acceleration, which allows detection of any significant drop-off.

The findings, coupled with daily questionnaires Lyles collected from players to assess fatigue, soreness and sleep, led to informed decisions to rest players.

Wearable technology at the NBA level, however, has presented its challenges. NBA players recently established the right to own their data and banned the use of that data in contract negotiation. While teams are obviously interested in biophysical data collected, players are concerned the data could be used against them during contract negotiations.

In the NBA Players Union collective bargaining agreement, there is a three-page section on the use of wearables. They are prohibited in games and their use in practices is voluntary. If a team was to use such data in contract negotiations, it would be subject to a $250,000 fine.

"I just picture that day when the assistant coach is in a locker room someplace or in a war room sending messages directly to another assistant coach on the bench saying, 'Uh, Player X, his hydration is lousy, his heartbeat is too high, his lactic acid in congealing, his blood pressure is high, and the facial recognition tells me he'd love to be anyplace but the court right now, so it'd be a good idea to replace him.' And maybe I'm not that interested because I'm trying not to think about it because it makes it all robotic and takes some of the spontaneity out of the game, but it's coming."

At all levels of competition, officials are constantly seeking ways to improve player performance and reduce injury. As preseason college football camps begin in searing late-July and August heat, the NCAA is introducing a new policy regarding workouts. The standard two-a-day practice has been eliminated, ostensibly to prevent coaches from conducting two physical workouts during the same day.

A second session will be allowed, but it will be limited to a walk-through or a meeting and no helmets, pads or conditioning periods are permitted. Many schools, including the U of M, had been following those guidelines with their second practices, keeping them light.

"The NCAA is clearly looking out for the well-being of the student-athletes," said U of M assistant athletic director of sports medicine Darrell Turner. "There is a big push across the country for student-athlete welfare, everything from nutrition to mental health."

The NCAA Division 1 Council announced its new rule in April, a policy emanating from the second Safety in College Football Summit held in February of 2016 in Orlando. The decision was based on emerging scientific consensus that the risk of concussion is greater in contact practices.

"Concussions are clearly at the top of things," Turner said. "(The NCAA) is trying to get each institution to make sure there is somebody in charge of the overall healthcare of the athletes - that one voice, that one person who can communicate with the other staffs and administration and coaches and make sure everyone understands what's going on.

Also adopted was the overall reduction of live-tackle practices. Four had been permitted during the week in preseason, but the new guidelines allow only three.

Football coaches, historically, have been reluctant to embrace change, whether it was a reduction in scholarships or restrictions in practice time. The NCAA has routinely stepped in to enforce new guidelines. Consecutive days of two-a-day workouts had not been permitted.

"They're trying to change the thought process," Turner said. "Football is a gladiator-type sport. You are expected to be physically and mentally tough. And that's where two-a-days, and even three-a-days, came into play. It was a toughness thing. But things are changing and football coaches have to be flexible."

Turner has been involved in sports medicine for 17 years and, like Dr. Azar, is intrigued by what virtual reality could do in terms of rehab. In a recent Wall Street Journal story, Brennan Spiegal, a Cedars-Sinai Medical Center researcher, said a VR experience - with goggles and a headset engaging an individual in a 360-degree experience - can reduce pain by 24 percent.

"Some are doing rehab that involves different video games," Turner said. "There are games where the (individual) has to squat down and (lift) an imaginary block. I think it's beneficial because it breaks up the monotony of rehab.

"People don't realize how difficult rehab is for these guys. They have a season-ending knee injury and they have four-to-six months of work. If you can mix it up, it helps keep them fresh."