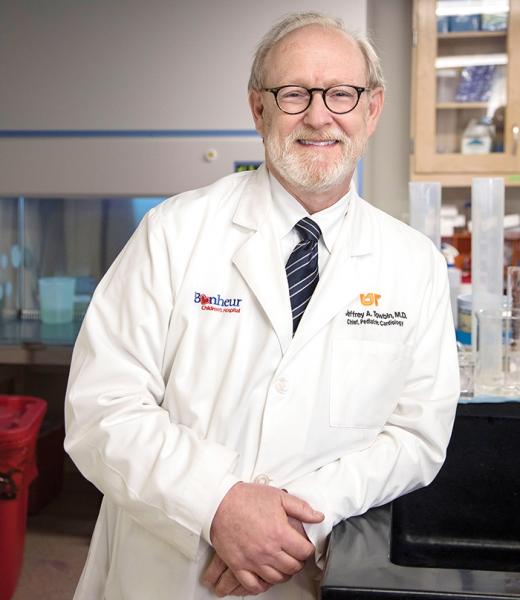 To his way of thinking, just OK is not OK.

Texas Children's Hospital and Cincinnati Children's Hospital Medical Center have long been ranked among the very top pediatric cardiology programs in the country, and since his arrival in Memphis, Le Bonheur has climbed into the top 10 from a place on no one's radar. But Cincinnati, like Texas before it, he says, was beginning to lose its fervor for the cutting edge.

"Frankly, I had never really heard of Le Bonheur before, but I was starting to get frustrated in Cincinnati and, at just the right time, Dr. Jon McCullers (pediatrician-in-chief) called," says Dr. Towbin, who initially passed on the offer before accepting.

"I interviewed and accepted the offer because of Dr. McCullers and (former president and CEO) Meri Armour. They had a great vision and were wanting to go from what was historically a community children's hospital focus to a national, high-impact hospital with international name recognition like the hospitals where I had been previously.

"I felt they were genuine, really wanted to support the vision that I was espousing and that I potentially could be helpful in building that kind of program in pediatric cardiology. So that was the intriguing thing to me. They were willing to trust me with the resources to build that sort of program. From a national perspective, people now know who we are and what we're doing, and that's kudos to all of my colleagues."

Dr. Towbin holds many overlapping titles, including co-director of the Heart Institute, chief of cardiology at both Le Bonheur and at St. Jude Children's Research Hospital, vice chair of strategy advancement, and professor of pediatric cardiology at the University of Tennessee Health Science Center.

Since coming to Memphis, he has recruited more than 20 new cardiologists and started a number of new programs, including the Cardiomyopathy/Heart Failure Program, the Mechanical Circulatory Support Program, and the Heart Transplant Program.

When Dr. Towbin arrived, Le Bonheur had not performed a heart transplant in nearly 20 years. Since October 2016, the number stands at 34, placing the hospital's yearly totals in the top 10 or 15 in the country, with excellent outcomes, he adds. In perhaps a bit of irony, having a high number of transplants has never been one of his goals.

Earlier in his career, children with heart muscle disease or heart failure were likely to be heart transplant candidates because pediatric medicine at that time had little else to offer.

"In Houston, I started the first pediatric cardiomyopathy/heart failure clinic and program, and I also was head of the transplant service, but my goal was always to avoid having to do a heart transplant if possible by optimizing medical therapy," says Dr. Towbin. "For me, I thought there were patients I could take care of with medications in a way that they wouldn't need a transplant in the near term, and potentially not ever. A lot of these were very young kids - infants 1, 2 and 3 years old in a lot of cases. I thought if you could avoid transplantation during that time frame, you could possibly give them a lot of years of not needing a heart transplant, if ever, and so that was really my goal-set at the beginning.

"Now, cardiomyopathy/heart failure has become a field in pediatrics and I have trained many of the cardiologists in the field. You finish three years of cardiology training; you do an extra year or two in cardiomyopathy and heart failure, as well as transplantation, opposed to doing one in transplant only. The goal is not having to transplant the patient, as the heart failure doctor may be able to optimize treatment in advance of that with our current therapies."

In the mid-1990s, Dr. Towbin was a research pioneer in what was called molecular cardiology in which he sought to identify the genes and viruses causing heart muscle disease and sudden cardiac arrest and arrhythmias. Today such pediatric genetic testing is common.

"I like to do what's called bedside-to-bench-to-bedside research, meaning I come across a patient with a problem that I don't think is well understood (the bedside), then take information from specimens like blood or tissue over to the laboratory (the bench), and try to figure out the genes or viruses that are causing the problem and the mechanisms of the disease causing the problems," he explains. "Then we try to bring that information back to the patient (the bedside) and develop a targeted therapy based on what we know the problem is. That's the approach we try to take. Learn about the disease, identify its cause and mechanisms, and develop new treatments. That should lead to better outcomes.

"So it's advanced from being 'We didn't know anything' to 'We knew stuff, but it was research' to it becoming a clinical test and now its part of everyday care. That's happened over the past 30 years. The hope is that through molecular biology, genetics, et cetera, we'll figure out through one of those pathways how to actually fix the problem instead of dealing with the symptoms of the problem."

When he was growing up in the projects of Brooklyn, an asthma condition led to Dr. Towbin's early interest in medicine because of the kind-hearted general practitioner he frequently visited. His older brother, Richard, also went into medicine and recently retired as a nationally recognized pediatric radiologist.

"We lived in the projects and though neither of my parents went to college, they were very interested in providing me and my brother with cultural opportunities," said Dr. Towbin, who played the accordion, the clarinet and the violin until he went off to college. "I actually might have been pretty good because of my ability to differentiate sounds. I never recognized that when I was young.

"One reason I went into cardiology is because I have good auditory memory and auditory skills. In medical school and residency, pediatric cardiology didn't have a lot of technological, high-level things with which to make diagnoses. You had to use your stethoscope and your ears, and I could hear things other people couldn't hear, and remember the sounds. It's a skill I just happened to have. It's a little bit of an unusual way to get into cardiology, but ultimately it worked out."