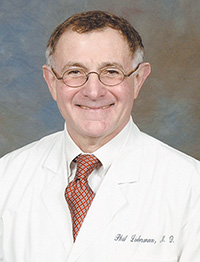 Dr. Phillip Lieberman's office phone is ringing a little more often in these days of worldwide concern over the fast-spreading coronavirus, Covid-19.

Actually, the phone is ringing a lot more often.

"It's affected the practice by having to institute screening measures for each phone call so we can follow CDC guidelines as to what a patient should be told when they call in for a visit," said Dr. Lieberman of Family Allergy & Asthma on Poplar in East Memphis. "We have a number of screening questions about their symptoms, whether specifically they've had fever and to what degree. Those patients with increased scores may be true candidates for having corona.

"They're encouraged not to come in because the only therapy we can offer is supportive therapy which we can do by telephone without increasing the risk of spreading to other patients in the office, or to the health care providers in the office."

As an expert in asthma and immunology, Dr. Lieberman believes sufferers with chronic lung disease possibly are more susceptible to contracting corona and are likely to be in for a worse time if they do get the virus.

"We have known from other corona viruses, like SARS or MERS, that chronic lung conditions, while they may not necessarily contract it more frequently, when they get sick with those viruses in many cases it's worse than in those with normal lungs," the doctor said. "This particular epidemic, to my knowledge, has not demonstrated that asthmatics per se are more severely afflicted, but common sense tells us that anyone with asthma who has diminished lung function would be more severely afflicted. So recently we have considered these patients to be at increased risk, not for contraction but for a more-serious episode if one does contract the disease."

Higher on the risk scale are the elderly, whose immune systems have been put to the test again and again over a lifetime, fighting off all manner of infections and microscopic foreign invaders for decade after decade.

All of those biologic battles take a toll on the immune system which, like every other part of the body, becomes less effective as a person advances toward senior status.

"Age itself is an independent risk factor, probably because the immune system undergoes with age what we call senescence," Dr. Lieberman said. "One can see the visible effects of aging on a person's appearance and those same effects occur internally where we can't see it, especially in the immune system. Its ability to fight infection diminishes with age and the older one gets the more accentuated it becomes."

This makes the elderly easy targets for all manner of diseases and ailments.

"The other reason the elderly are more susceptible to severe attacks," Dr. Lieberman adds, "is that there's a very strong correlation between chronic diseases and aging and additional medication use, so older people are more commonly afflicted with heart disease, lung disease, diabetes, all the conditions which we know lower our resistance to the viral infections. It also makes the cases that are contracted worse."

While researchers believe leading a healthy lifestyle - proper diet, exercise, sleep, stress management - can give important support to the immune system, Dr. Lieberman says there's no way to actually strengthen or improve the system itself.

"I wish there were, but the effects of aging can't be altered acutely and once you've reached a certain point there's no way to reverse that," he said. "With this particular virus, when you've reached age 60 you have increased your risk for contraction, but more importantly for severe disease. At age 70 there is a prominent increase and then at 80 you're at the highest level. There's very strong statistical significance to these decades. Severe episodes are far more frequent the older one gets."

Respiratory infections, influenza, and particularly pneumonia have long been a leading cause of death in people over 65 worldwide, but the rapid spread of the Covid-19 virus has surprised even experts like Dr. Lieberman, the former president of both the American Academy of Allergy, Asthma and Immunology, and the American Association of Certified Allergists.

"I've not lived through an epidemic like this in my 50-something years of practice," he said. "For those of us who finished medical school quite a while ago, we're re-learning the basic principles of epidemiology as this virus hase transformed our lives. This is a novel experience for all practicing physicians today."

He said the most common defenses - social distancing and quarantine - remain the best strategies for slowing the corona spread while researchers work on developing drugs or vaccines, both of which will take considerable time.

Where Covid-19 is headed and where it will end remains a mystery, the doctor says.

"It depends on several factors, the most important one being whether this virus is seasonal, or non-seasonal and ever-present," Dr. Lieberman said. "If it's seasonal, we're probably pretty lucky because then it will burn itself out just like the flu does, usually around the end of May when the weather gets warm. Not all respiratory viruses are seasonal, though, so we don't know how this one is going to behave."

Yellow fever claimed more than 5,000 lives in Memphis in the 1870s, a seasonal epidemic that spread unchecked until the cold months of winter arrived when there were no more mosquitoes. That connection was not recognized until years later.

"Of course, we are far better off today," said Dr. Lieberman, "except back then people understood that if they left the city they could get away from the disease. When you were here it was just a disaster."