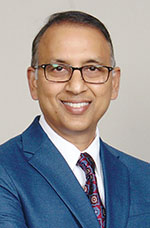 Balasubramaniam will serve as the executive leader for the human resources function for MLH with a focus on thoughtfully advancing the organization's culture, driving a comprehensive talent strategy and enabling organizational capacity and capabilities for operational excellence. Balasubramaniam replaces former CHRO Carol Ross-Spang, who retired in August.

Prior to joining Workday, Balasubramaniam led HR transformation and supported organizational growth at Washington's Providence St. Joseph Health and Henry Ford Health System in Detroit. In addition, he has led healthcare development and consulting services. In his corporate roles and as an entrepreneur, Balasubramaniam's relentless focus is creating value and enhancing the human experience.

A native of Chennai, India, he has called Michigan home since 1999. Balasubramaniam holds a Master of Social Work, Human Resources and Industrial Relations and a Bachelor of Science in physics from the University of Madras. He is a fellow of the American College of Healthcare Executives (FACHE) and earned his certification as a Global Practitioner of Human Resources from the Society of Human Resources Management in 2008.