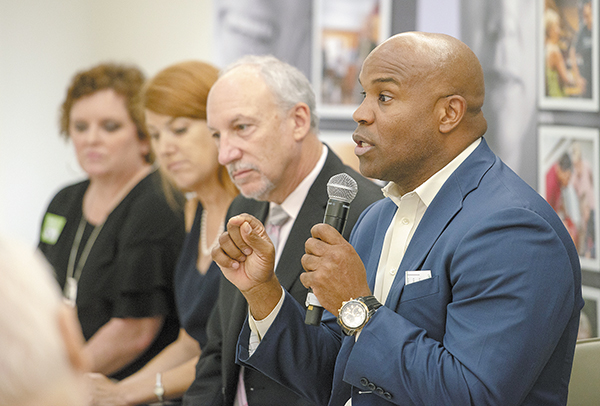 Dr. Greg Vidal speaks at a patient education event. Next to him are Dr. Lee Schwartzberg, Wendy Allen and, at the far left, Carrie Anderson.

Clinical researchers at West Cancer Center and the University of Tennessee Health Science Center (UTHSC) believe they may be close to a breakthrough in determining not only the factors that increase the risk of a particular type of breast cancer, but also developing alternative therapies.

While the advancements of clinical research have had a positive impact in the treatment of breast cancer during the past 30 years, some types remain a stubborn challenge, such as triple negative breast cancer, a lesser-known, more aggressive kind.

"We are still in the infancy stages of research," said Dr. Lee Schwartzberg, MD, executive director and co-founder of West Cancer Center. "Traditionally, we've defined triple negative breast cancer by what it is not, but we are moving away from that. Now we trying to define it by what it is in order to find out additional ways we can treat it."

Because the tumor isn't supported by these receptors, triple negative breast cancer doesn't respond to traditional hormonal therapy and specific targeted cancer therapies. Usually a patient is given chemotherapy to shrink the tumor, followed by surgery to remove it. As a result, the cancer has a higher reoccurrence rate and is more likely to become metastatic.

Dr. Schwartzberg said while researchers are aware that this type of cancer is more commonly found in African-American women, the reasons why aren't fully known

According to Athena Starlard-Davenport, Ph.D., assistant professor of genetics, genomics and informatics at UTHSC, research is being done in the Memphis area to determine what factors increase the cancer risk in African-American women.

"Triple negative breast cancer is one of the most aggressive types of breast cancer, but it's not seen as often," Starlard-Davenport said. "It accounts for only 20 percent of the breast cancer found in women. Not much is known about it. Clinical researchers have access to the right demographic to research it in the Memphis area. We are trying to determine if certain biological or environmental factors, or a combination of both, increase the risk of this type of cancer among African-American women."

A study conducted four years ago by the Avon Foundation for Women found that African-American women are twice as likely to die from breast cancer as white women in Memphis.

Starlard-Davenport, in collaboration with West Cancer Center, has collected saliva, blood and tissue samples from African-American women over the age of 18 to determine if there is biological evidence that could increase the risk of cancer. She says the laboratory results will be revealed soon.

Additionally, Starlard-Davenport is collaborating with the department of pharmacy at UTHSC to look at how MicroRNA can be targeted to treat triple negative breast cancer cells, which are resistant to a certain type of chemotherapy called doxorubicin.

One trial, currently in its third phase, is looking at how patients with relapsed and refractory metastatic triple negative breast cancer respond to sacituzumab govitecan, an investigational antibody drug conjugate, which is designed as a targeted therapy to treat patients with metastatic cancer. Researchers have seen favorable clinical activity in patients, and the drug is under priority review by the Food and Drug Administration (FDA). If approved, sacituzumab govitecan would be the first antibody drug conjugate approved for the treatment of metastatic triple negative breast cancer.

Dr. Gregory Vidal, MD, Ph.D., medical oncologist and hematologist at West Cancer Center and assistant professor of medicine at UTHSC is conducting a clinical trial looking at how patients with metastatic triple negative breast cancer without an overexpressed HER-2 protein, but an activated HER-2 pathway, which is termed HER-2 signal positive, may respond to traditional HER-2 targeted medication, neratinib, which is designed to treat a different type of breast cancer.

"We are attempting to repurpose a current drug in an area where it wasn't intended to be used," Dr. Vidal said. "We are hopeful we will be able to offer more therapy options for patients. Additionally, there are numerous other drugs being studied at the West Cancer Center for triple negative breast cancers, including immune activating drugs already proven effective in numerous other tumor types."

Dr. Vidal says that through clinical research, researchers have discovered there are various subtypes of triple negative breast cancer, which open the door for additional therapy options for patients.

All three experts agree that because of the research taking place in the Mid-South, researchers are getting closer to giving physicians more treatment options for patients.

"Our ultimate goal is to cure all types of breast cancer in women, and we have made tremendous strides in the last 25 years," Dr. Schwartzberg said. "The mortality rate has decreased 41 percent since 1991, but we still have a long way to go to identify therapies, especially in the area of triple negative breast cancer."