Light at the End of the Tunnel? 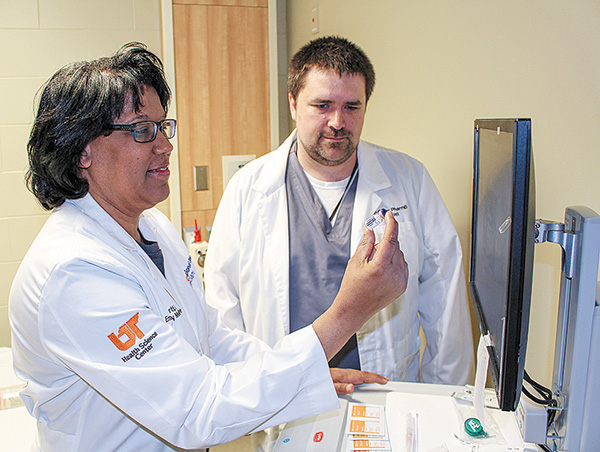 The numbers are staggering.

On average, 115 people die every day nationwide from overdoses of opioids. In Shelby County, 159 people died from opioids in 2017, up from just 51 in 2011, according to the Shelby County Health Department.

By next year, the total locally could exceed 250 such deaths annually. More people are dying from opioid overdoses than from car accidents. Last year, 854 patients showed up at Memphis-area hospitals presenting signs of opioid overdoses.

Last year, in conjunction with the Tennessee Hospital Association (THA), Regional One Health (ROH) and other hospitals across the state began a pilot program called Opioid Light to cut back on the number of opioid prescriptions being issued from emergency rooms, often the front line of medical care in this overdose society.

"You do a physical exam - usually unconscious with pinpoint pupils is one sign - plus we get some background from the family, from the EMTs or whoever brought them in, and from police," says Dr. Chantay Smartt, an emergency medicine physician at ROH. "Since we started this program in June of last year, we've been able to reduce our opioid use by about 20 percent, and for this institution that's big because we see a lot of burns and trauma and we're a major clinic for sickle cell pain. We have a lot of patients that other hospitals don't."

Dr. Smartt and emergency room pharmacist Justin Griner, PharmD, agree that Opioid Light is the way to go, to reduce a patient's exposure to opioids whenever possible and to spread the word throughout the hospital.

"We've tried different things, providing Naloxone for patients to take home and reducing the number of opioids we send patients home with prescriptions for acute pain conditions," Griner said. "The Opioid Light is an initiative we've been working with the THA on reducing the opioids patients receive when they're in the emergency department in acute pain. It doesn't mean we're not treating acute pain, but we're trying to use other non-addictive agents when that's appropriate."

As the only Level 1 Trauma Center within 150 miles, Regional One sees far more than its share of critically injured patients in severe pain, making the drive to pull back on opioid use a difficult daily decision.

"There are some conditions that obviously you're going to give opioids for - major trauma, burns, sickle cell patients, post-surgical pain - but we're trying to get the providers, the staff and the patients themselves to be aware that you can use an opioid, but you can also use non-steroidal things like Ibuprofen and Aleve," said Dr. Smartt. "You can use opioids for breakthrough pain, but your main medication should be a Tylenol or Aleve or an Advil if your medical condition requires it.

"Some patients - your end-stage renal, severe diabetics and congestive heart-failure patients - can't take non-steroidal medications, or if you're allergic to them, but we're trying to get other patients and their families thinking that there are other options that patients can use for pain control that are non-addicting."

The U.S. Centers for Disease Control published a study in 2017 noting that the more opioids a patient is exposed to for acute pain, the more likely that patient will be using opioids a year later.

"That speaks partially to the addictive nature of opioids," Griner said. "Some manufacturers and even some medical journals in the past have indicated that opioids weren't addictive, but obviously they are. I think that more and more institutions and providers are going to be moving toward the model of 'if we can treat you appropriately with a medication that is not an opioid, then that is going to be our first choice.'"

With the use of opioids so ingrained in the treatment of pain - there are more opioid prescriptions than people in Tennessee - changing the mindset is like trying to turn around a battleship, yet there are some positive signs.

"Actually it's been surprising that there has not been a lot of pushback," said Dr. Smartt. "Most of our patients appreciate being educated. Once you tell them there's a potential for addiction with this particular class of drug, a lot of them will say 'then don't give me that one.' We do have patients who are already addicted, and for those we have places in the city where we can refer them. We can't force them to go, however.

"We've also just partnered with an organization called Navigation, and they send 'navigators' out to the hospitals. Most of them have recovered from addictions so they can talk on a one-on-one level with the patient about what it is like to go through detox and that type of thing."

Under Opioid Light, ROH doctors and pharmacists try to determine how many opioid pills a patient might need - or if they need them at all - and provide the minimum with the short-range goal of switching to less potent options.

The program includes an all-hands-on-deck Opioid Stewardship Committee that includes staff from chronic pain specialists, internists, anesthesiologists, general, orthopedic, plastic and trauma surgeons, to pharmacists, in which data is collected and literature reviewed in the effort to decrease the use of opioids if indicated, with the overall objective being to providing better, safer care for patients.

"Treatment of pain in some services can be very challenging, but maybe they can switch to fewer pills per day and/or use other treatments like physical therapy and nerve blocks," Dr. Smartt added. "It's really been a collaborative effort."

Griner said gathering and providing data is a key element in the battle against opioid addiction.

"Providing data is sometimes all that it takes," he said. "Once a certain provider sees that a peer is using 30 percent fewer opioids to treat the same patients, that may be all it takes to say, 'Hey, I need to explore some of these other options and reduce my own opioid use.' Data is a big part of what we're trying to do.

"Our overall reduction so far is 20 percent and we hope there is still room for improvement, but with our trauma population and our sickle cell population we honestly don't know. We're playing this by ear a little bit in seeing how far we can go while still providing appropriate care to our patients."