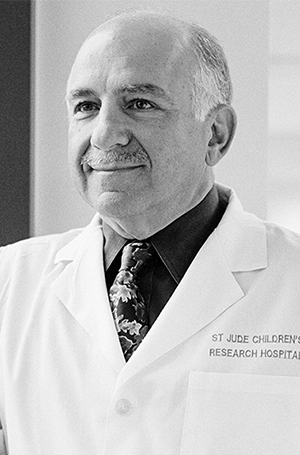 Joseph V. Simone, MD, a clinician who helped lead the first curative treatment for childhood leukemia, died Thursday, January 21, 2021, at the age of 85. In addition to his work on the legendary Total 5 clinical trial, Simone served as the third director of St. Jude Children's Research Hospital from 1983-92. Under his leadership, the hospital instituted an HIV/AIDS clinical program, dramatically elevated its research, and created one of the world's largest long-term follow-up clinics for childhood cancer survivors.

A native of Chicago, Simone joined St. Jude in 1967, during an era when childhood cancer was a veritable death sentence. The hospital's first director, Donald P. Pinkel, MD, recruited Simone by saying, "You must have a Moby Dick to chase." Within a couple of years, Pinkel put Simone in charge of the hospital's leukemia program. Simone eventually served as associate director for clinical research before becoming the hospital's director. Along with Pinkel, Simone helped develop and lead the Total 5 protocol for acute lymphoblastic leukemia (ALL). That clinical trial raised the ALL survival rate from 4 percent to 50 percent and set the stage for decades of progress in curing childhood catastrophic diseases.

In 1982, Simone met with Chuck Sherr, MD, PhD, aiming to lure the young scientist away from his post at the National Cancer Institute. Sherr and his wife and scientific colleague, Martine Roussel, PhD, ultimately agreed to the move.

"Joe lent us his unflagging support for the next 10 years and gave me a voice in institutional development," said Sherr, who founded the Department of Tumor Cell Biology. "He was the ideal boss, a patient listener, deliberative, honest, wise, funny, always available, outspokenly friendly, and, as a proven clinical researcher with significant past accomplishments, equally committed to improving basic science."

Simone brought scientific attention to St. Jude by entering the Pediatric Oncology Group in 1981 and later paved the way for St. Jude to be a charter member of the National Comprehensive Cancer Network. It was also during his tenure that the hospital considered and, ultimately, rejected an offer to relocate to Washington University in St. Louis.

"Although our Board of Governors ultimately resisted the move, I believe their extensive deliberations convinced them that our organization was transitioning from a triple-A team to the major leagues," Sherr said. "Joe's deft handling of many extant complexities and unwavering commitment to St. Jude fostered the subsequent recruitment of many additional chairpersons and triggered the advent of new construction on our campus that has continued to this day. Like so many others, I adored him--he was a remarkable man."

After leaving St. Jude, Simone played leadership roles at cancer centers around the country, including Memorial Sloan-Kettering Cancer Center in New York and the Huntsman Cancer Institute at the University of Utah. He also founded Simone Consulting, which provided a range of services in cancer care and cancer research.

A brilliant researcher and clinician, Simone was beloved for his gregarious nature and his joviality. In honor of his many achievements, the hospital created in 2014 the Joseph Simone Endowed Chair in Basic Research.

"Joe was a remarkable, unforgettable person. Despite being a giant in the field and a leading academic voice, he was down-to-earth, approachable, and exceptionally kind. Joe had a special talent of getting to know everyone, and he used this to bring out the best in each person as well as to bring people together," Pui said. "I will miss him dearly but take comfort in knowing that his legacy lives on in our hearts and in the work of St. Jude."

Simone is survived by his wife, Pat, and his daughters, Pattie, Julie and Margaret.