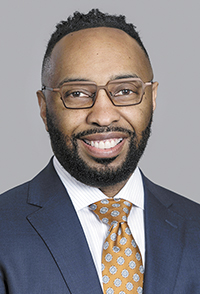 Edgerson has been a part of the Le Bonheur family since 2006 when he began serving as director of Pharmacy. In his previous role as vice president of Professional Services, Edgerson oversaw operations in the Pharmacy, Lab, Radiology, Rehabilitation Services, Nutrition, Spiritual Care, Child Life, Social Work, Volunteer Services and Respiratory Care. He was named vice president of Operations in 2020 and added responsibility for facilities and hospitality services.

In addition to his work at Le Bonheur, Edgerson has held the offices of President and Secretary/Treasurer for TSHP and been involved in various professional organizations such as TPA, Children's Hospital Association, American Society of Health-System Pharmacists, and the UTHSC Pharmacy Alumni Board.