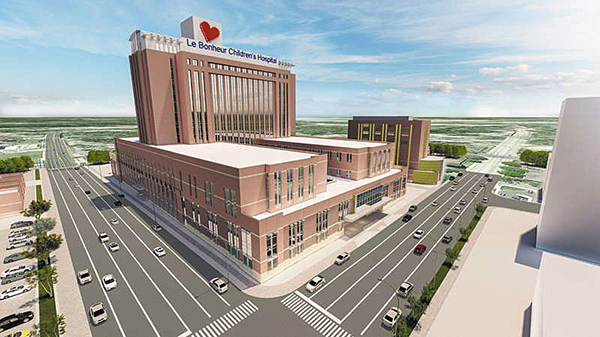 Le Bonheur Children's Hospital has announced the largest building expansion since the hospital opened in 2010. The four-story, $95.4-million addition will allow Le Bonheur to continue on their sustainable, long-term growth trajectory. The expansion includes enlarging the cardiovascular and neonatal floors, in addition to the surgery recovery area and main floor.

The 128,575 square foot construction and renovation will extend the west side of the hospital to the sidewalk of Dunlap Street, between Poplar and Washington avenues. Updated plans include an additional two stories to an expansion that was first announced in 2019. That version was put on hold during COVID-19.

The additional infrastructure will support an expansion of the Neonatal Intensive Care Unit (NICU) for premature babies bringing 14 new beds to the existing 60-bed unit and will include eight additional surgery recovery bays. Le Bonheur will also convert 12 existing beds to critical care use immediately to ease capacity needs during construction.

Le Bonheur's Heart Institute has experienced significant growth in the past five years, adding 21 new cardiologists since 2015. The Heart Institute is recognized as a top program by U.S. News & World Report, as an elite pediatric cardiac surgical program by Society of Thoracic Surgeons and is a leader in transcatheter closure of Patent Ductus Arteriosus in premature infants.

Plans for a groundbreaking and other timing for construction milestones will soon follow.