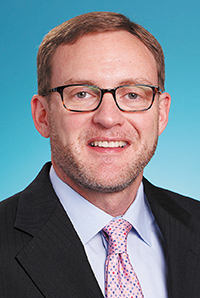 This is a good time of the year for John L. Jefferies, MD.

February is American Heart Month and last month was National Mentoring Month. He knows quite a bit about both.

His list of mentors is a veritable who's who in cardiology and as a heavily recruited expert in cardiomyopathy as well as cardiovascular genetics, his name is right there with them.

Last July, Dr. Jefferies arrived in Memphis as the Jay M. Sullivan Distinguished Chair in Cardiovascular Medicine and Chief of Cardiology at the University of Tennessee Health Science Center (UTHSC).

He also is head of the new cardiovascular institute - a collaboration between Methodist Le Bonheur Healthcare (MLH) and UTHSC.

"Our long-term goals are to become an epicenter for cardiovascular care," said Dr. Jefferies, a 1996 graduate of UTHSC College of Medicine. "We have so many resources available to us that we should really become a destination program for people with heart disease. We also want to drive cutting-edge research as much as possible and be a magnet to attract high-level physicians, researchers and trainees. We have big goals, but I truly believe they are achievable."

As for his many mentors, he says: "I can't repay them enough, and they're still my mentors. They're people I still talk to on a regular basis."

A native of La Follette, Tennessee, about 40 miles north of Knoxville, Dr. Jefferies was drawn to medicine as an undergraduate majoring in microbiology at the University of Tennessee.

"I had a job as a patient-care assistant at a Knoxville hospital where I'd help get people up and out of bed, wheel them out in wheelchairs, that sort of thing," he said. "I really got to know the patients and how appreciative they were of all the care they were being provided. I think that's the time I knew that I wanted to go into medicine. I knew I wanted to help people."

After medical school at UTHSC, he did an internship and residency in both internal medicine and pediatrics at the University of Kentucky, earned a Masters of Public Health degree, and then did a fellowship in both pediatric and adult cardiology at the Baylor College of Medicine in Houston.

Before returning to Memphis last summer, he was director of the Advanced Heart Failure and Cardiomyopathy Services in the Heart Institute at Cincinnati Children's Hospital Medical Center.

Along the way, he says, there were many mentors, such as Dr. Jacqueline Noonan, a pediatric cardiologist in Lexington, Kentucky, who characterized a genetic disorder now known as Noonan Syndrome.

"I spent a lot of time with her during my residency training learning about heart disease, but she would also go to indigent areas of eastern Kentucky and treat people for free," says Dr. Jefferies. "She'd spend her whole day there and provide as much medical care as she could, at no charge. I thought that amount of dedication and altruistic behavior embodied what I wanted to become as a physician."

Another Kentucky cardiologist who made an impact on Dr. Jefferies was Dr. Roger Mills.

"He really taught me the foundation of medicine: how to be a good doctor, how to be well read, how to do good examinations, how to order the rights tests and how to become an academic physician - someone who likes to take care of patients, but who also likes to teach and do research," Dr. Jefferies says. "He strongly encouraged me to do research that would change the delivery of care. This allowed me to favorably impact care across the globe.

"Then during my cardiology training in Houston I met Dr. Jeff Towbin who is an expert in heart failure among kids and also an expert in cardiovascular genetics. I learned a lot of what I do currently from him. He's been a mentor to me for 25 years and, interestingly, he's now the chief of pediatric cardiology at Le Bonheur."

There also is Dr. Douglas Mann at Washington University in St. Louis who taught him about the importance of a strong work ethic and a willingness to put in long hours "if you really wanted to make a difference in medicine. If you want to write papers and do research you may be doing it on a Saturday because that's the only time you have."

Dr. Frank Smart at Louisiana State University in New Orleans also made a lasting impression on him, which is evident when Dr. Jefferies speaks of the new cardiovascular institute collaboration between MLH and UTHSC and his own work in cardiology.

"He taught me that idea about reaching for very high goals and striving to be transformative in medicine," says Dr. Jefferies. "What can you do that really changes the current practice of what we do in medicine? That was something he and my other mentors taught me a lot about."

As an expert in cardiomyopathy and cardiovascular genetics, Dr. Jefferies has authored more than 200 peer-reviewed manuscripts and 20 book chapters, functioned as lead editor of two cardiovascular textbooks, and delivered more than 300 lectures nationally and internationally.

"I see people from all over the world who come to me seeking guidance on cardiomyopathy and heart failure," he said. "They make these long journeys because they see the work that I have done and feel that we can offer something additive and unique to their care. I see both children and adults. Some of these patients have followed me from my prior institutions in Houston and Cincinnati. Since I've been in Memphis I've developed a unique relationship with St. Jude."

While only about 10 percent of practice is in pediatric cardiology, Dr. Jefferies sees patients from St. Jude who are long-term survivors from childhood cancer who have lived through the drugs and radiation therapy used to treat their cancer.

"But that actually predisposes people to developing heart disease - an area of medicine called cardio-oncology - so I have a strong research partnership with St. Jude, and that's where a lot of my clinical research is being conducted," he says. "Being a member of their research team at St. Jude was a big part of why I wanted to come to Memphis because it's such a spectacular institution and they have so many resources and so much data. They were looking for a cardiologist who's interested in these areas so it's just worked out well in a lot of ways."

Dr. Jefferies and his wife, Shari, a child psychiatrist, have a son, 9, and a daughter, 8. Since he travels frequently, family activities such as golf and tennis are a priority when he is home as well as coaching his son's flag football team.