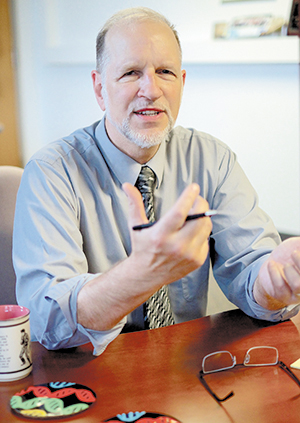 Progress of Research Is Raising Hopes

Benefitting from an increase in genomic research during the past decade, Memphis-area researchers have been able to make significant strides in pediatric genomic medicine.

In fact, according to three local experts, there is recent evidence through research and clinical trials that genomics is beneficial for clinical use, especially in pediatric cancer patients. During the past four years researchers have been so successful in their efforts that Le Bonheur Children's Hospital plans to add genomic sequencing to study pediatric diseases by 2020.

Scientists began to perform genomic sequencing, the process of determining the complete DNA sequence of an organism's genetic code at a single time, only two decades ago. Researchers sequence the genomes of patients to look for variations, which can cause certain medical risk factors in patients.

To sequence a genome, physicians collect blood or saliva from the patient. Then, chemicals are used on the sample to break open the cells and gather the DNA that's housed in them. Enzymes strip away surrounding proteins to isolate tiny strands of DNA. The genetic material is then placed in sophisticated machines, which read each of the 3 billion base pairs that make up a person's genetic code.

"Genomic sequencing is still in its infancy, but it's growing quickly," said Robert Williams, Ph.D., professor and chair of genetics, genomics and informatics at the University of Tennessee Health Science Center. "You aren't seeing it done in the average clinical setting yet. There just isn't much payoff clinically. It's only been common to sequence within the last 10 years for active research purposes. St. Jude is making major strides in cancer research with it through clinical trials."

Currently there are two ways genomic sequencing has been successful in clinical research: to learn more and assist in the diagnosis of certain diseases, such as specific subtypes of cancer, and to assist in medication dosage and certain targeted therapies for cancer patients.

"Sequencing has made the greatest impact in cancer patients," Dr. Williams said. "It's helpful to know how a patient will handle a drug before they even take it. Physicians who treat certain types of cancer don't have the luxury to tweak a patient's dosage over a long period of time. They can't afford to get it wrong."

An example is a phase III clinical trial called Total Therapy 17, which is in its second year at St. Jude Children's Research Hospital. According to Scott Newman, Ph.D., group lead on bioinformatics analysis for St. Jude, the purpose of the clinical trial is to improve the cure rate and quality of life in children with acute lymphoblastic leukemia (ALL), a cancer of the blood and bone marrow that affects white blood cells, by adding targeted treatments that are tailored to each child's type of ALL.

According to Dr. Newman, this is the first big clinical trial at St. Jude where whole genomic transcriptome analysis is used for clinical care.

Recently, Dr. Newman presented to the American Society of Human Genetics, a professional organization for human genetics specialists, a proof-of-principle study, which illustrated that nearly 80 percent of the 78 pediatric cancer patients studied had one clinically useful finding through genomic sequencing.

Over the past four years, St. Jude has performed genomic sequencing and data analysis internally for research purposes through clinical trials. The information is gathered and shared on the St. Jude Cloud, which is an online data-sharing platform that provides researchers access to the world's largest public repository of pediatric cancer genome data.

"We hope that by providing this data, we can generate more information about rare cancers in order to be able to treat them in the future," Dr. Newman said.

A little over three years ago, Le Bonheur Children's Hospital began its Biorepository and Integrative Genomics Initiative, which collects DNA samples of patients, with their family's consent, to help physicians and researchers study the influence of genes on pediatric diseases and how well they respond to treatment.

Chester Brown, MD, Ph.D., genetics division chief at Le Bonheur, said the initiative is an excellent resource for the hospital to gain access to research on diseases affecting children.

According to Dr. Brown and Dr. Williams, the biorepository is a useful resource worldwide based on the demographics of Memphis.

"Memphis is unique because 64 percent of the population is African-American," Dr. Brown said. "African-American DNA isn't represented in many databases around the country. Our biorepository is a valuable resource."

The vetting process to access samples is rigorous, and researchers must share their findings with Le Bonheur. Dr. Brown said the samples are used only for research purposes.

Additionally, Le Bonheur has a community outreach initiative to educate the Memphis community on genetics and genomics.

"This is an academic endeavor," Dr. Brown said. "We must have community engagement and involvement. We've started genomics and genetics education in the Memphis community, including at White Station High School and many local churches, to educate the average person on the advantages of this type of research."

Dr. Brown said the next step for Le Bonheur is to perform genomic sequencing and analysis internally. He said external funding has been secured, and he's hopeful that Le Bonheur will be able to have the machines and storage available by next year.

All three genomics experts say that even though genomic sequencing isn't currently available in an average clinical setting, it will be in the future and the cost will be minimal.

According to the National Human Genome Research Institute, the first whole genome sequencing cost $2.7 billion and was completed in 2003. According to Williams, 16 years later, the cost is around $1,500 and is expected to go down.

"I expect that one day everyone will be sequenced at birth," Dr. Williams said. "All of the data won't be useful right away, but it will help each individual live a better life. It will help physicians treat patients over their entire lifetime."