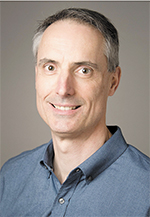 The National Heart, Lung, and Blood Institute recently awarded Jonathan H. Jaggar, PhD, Maury Bronstein Endowed Professor in the Department of Physiology at the University of Tennessee Health Science Center (UTHSC), a $2.3 million grant for his study titled "PKD proteins in endothelial cells." The proposal's goal is to provide a new understanding of how endothelial cells regulate blood pressure.

This project, which is being funded for four years, will provide significant new information about vasoregulation by endothelial cell PKD1 and PKD2 proteins.