Dr. Frederick Azar Re-Elected Treasurer of the American Board of Orthopaedic Surgery 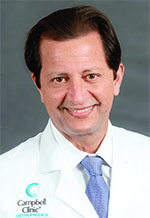 Dr. Azar was elected to the ABOS Board of Directors in 2016 and serves as Chair of the ABOS Oral Examinations Committee. He specializes in orthopaedic sports medicine and serves as the team physician for the Memphis Grizzlies and local Memphis colleges and high schools. Dr. Azar previously served as the President of the American Academy of Orthopaedic Surgeons. He earned his medical degree at the Tulane University School of Medicine. He completed his Orthopedic Surgery Residency at University of Tennessee-Campbell Clinic and a Sports Medicine Fellowship at the American Sports Medicine Institute, Birmingham, Alabama.