Decision Easy as Pie for This Nephrologist 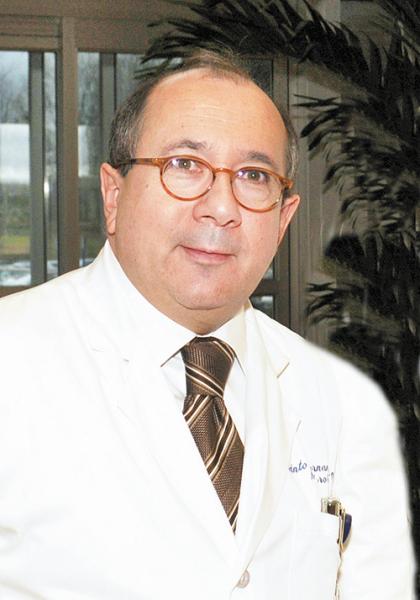 All it took to convince Dr. Jacinto Hernandez that Memphis was the place to establish his practice in nephrology more than 40 years ago was a piece of strawberry pie and some southern hospitality.

He had graduated from the University of Santiago School Of Medicine in his native Spain and had completed an internship in Pottsville, Pennsylvania, and a residency in Plainfield, New Jersey.

In 1978 he came to Memphis to discuss a nephrology fellowship position at the old University of Tennessee William F. Bowld Hospital.

"My interview was with Dr. James Gibb Johnson, a true southern gentleman," Dr. Hernandez recalled. "I was so impressed with him in the interview, and with the way he treated patients. I already felt like this was my home. Then there was this other event."

He stayed nearby at Madison and Pauline.

"I remember I stayed at the Medical Center Holiday Inn and I had lunch at a Shoney's there and I looked over the counter and saw these beautiful strawberry pies," Dr. Hernandez said. "I had never seen a strawberry pie before and I asked a very nice waitress, 'Could you give me a piece of that?' She said sure. So I ate one piece and then I had another one.

"Then I paid and I gave her a tip and she said, 'Thank you, sir. And please come back again.' Then I said, 'I have been in this country for four years - in the North - and no one has ever said to me 'Please come back again.' So I went upstairs to my room, called my wife in New Jersey and said, 'Mama, we are going to Memphis.' I had no doubt that this is where I wanted to be."

Today his Mid-South Nephrology Consultants has seven doctors, two nurse practitioners and offices and out-patient clinics in Memphis, Southaven, West Memphis, Covington, Forrest City and Blytheville. His wife Dominga is the office manager at the main practice in Southaven.

Much has changed in the years since he arrived in Memphis four decades ago.

"Everything in nephrology was new to us to explore and investigate because we had maybe one-fiftieth of the knowledge of what we know today," Dr. Hernandez recalled. "You made errors. You try this; you try that. It was all new. Compared to today, the equipment was totally different. It was more simplistic.

"But from a clinical viewpoint, it was perhaps a good time. Physicians had to be physicians. They had to think. It was more bedside manner and more clinical. You had to be close to the patient and listen to the patient. Today it's all about tests and CAT scanners and MRIs. Then, it was different."

He also credits two other UT nephrologists - Dr. Sergio Acchiardo and Dr. Fred Hatch - for mentoring and teaching him what it is to be a physician.

"When I came to the states, I really learned a lot from physicians who had really good bedside manners," Dr. Hernandez said. "You could see the way they related to the patients and to their families, and you learned from that."

In 2014, Dr. Hernandez was the honored for his career and service at the National Kidney Foundation of West Tennessee's annual Gift of Life Gala.

While growing up in Spain, the coveted occupations were lawyer, physician, engineer or teacher. He enjoyed lab work and studying the mysteries of electrolytes and eventually became the first in his family to become a physician.

He chose nephrology as a specialty because it was a field in its infancy.

"The diseases today are the same - mainly diabetes and hypertension - but now people live longer and that creates new problems," said Dr. Hernandez. "The disease remains, but now we have more complications.

"For example, we see more patients with amputations that we didn't see before. We also see more people with congestive heart failure and the kidneys fail so they continue on dialysis."

The kidneys eliminate toxins, produce important hormones and have an important working relationship with the heart and liver which must remain strong.

Today he spends most of his time not at the out-patient dialysis clinics but at the hospitals tending to the very sick.

"I like the ICU and sick care," said Dr. Hernandez. "I like to see patients who offer me a challenge. That's what I do on a daily basis, to relate to patients and their families."

He and his wife like to visit Spain and their three grown children - two daughters and a son - and six grandchildren, living in Washington, D.C., San Francisco and Los Angeles.

Dr. Hernandez also pursues a passion he acquired when he was 9 years old: playing the bagpipes, the mid-range Galician version from his homeland.

While bagpipes are often heard at funerals in the United States, such as those for fallen law enforcement officers, Dr. Hernandez said his style is more for marches or for classical concerts, such as the one he did four years ago before 400 fellow members of the European Fraternity of Sailing.

He is still a fraternity member, though he now his boat has a motor.

"I gave a concert in Spain on Johan Sebastian Bach with bagpipes," he said. "People had never heard that before. I play for friends, but not really so much in public. I just play for pleasure.

"The only one who hears it here is my wife at home, and she says 30 minutes and stop. It is very loud."