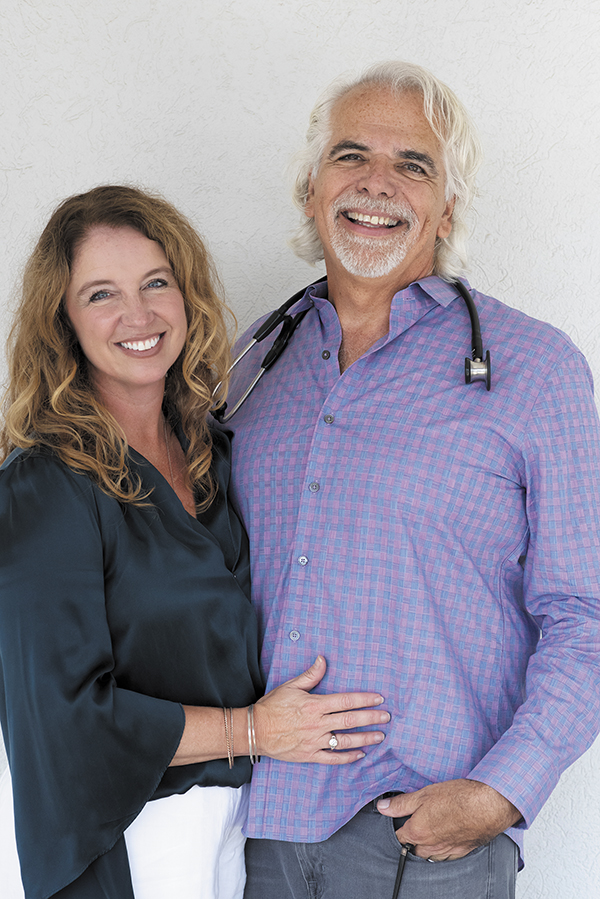 Shannon and Lloyd Finks have had their 15 minutes of media fame occur on several occasions during the past few years in episodes aside from their career accomplishments in pharmacy and medicine.

There was 2013 when their musically gifted son Harrison, then 10, created a video for Elton John, asking to meet the superstar during his upcoming tour stop in Memphis. It worked, and Harrison, his sister Grayson and his parents were invited backstage for a 10-minute visit and a group photo. Sir Elton later told the concert audience about his talented new friend and dedicated a song to him.

"I don't think we're on Elton John's radar anymore," says Shannon, "but that was pretty exciting."

And in 2015, a Pennsylvania truck driver was passing through Memphis when he developed a serious foot infection, underwent surgery and was unable to complete the drive home for Thanksgiving. Faced with spending the holidays in a hospital bed far from home, the grateful truck driver instead was delivered to his Pennsylvania doorstep in a 1982 RV, which the Finks were driving to visit family in Maryland.

"It was a couple hundred miles beyond where we needed to go, but we learned so much from that experience," recalls Lloyd, adding with laugh, "I learned that there's a lot of things about my driving that is irritating to truck drivers."

Says Shannon: "It was also a special thing to teach our kids how small and random acts of kindness can really make a huge difference."

When they are not hanging with superstars or going the extra mile (actually, hundreds of them) for a stranger or performing as the musical group Zula's Child, Shannon and Lloyd Finks are doing their best to cure whatever ails Memphians.

Soon they will open Zup Medical Services, an upscale concierge medical practice offering both urgent and primary care in the Laurelwood Shopping Center.

Shannon is a Pharm.D, with most of the alphabet after her name - FCCP, BCPS, BCCP, AHSCP-CHC - and more on the way. She is a professor of clinical pharmacy at the University of Tennessee College Of Pharmacy, is board certified in pharmacotherapy - how medications and the body interact - and in cardiology pharmacotherapy, and has specialty certifications in hypertension, precision medicine and applied pharmacogenetics.

She'll be adding another alphabet title when she becomes board certified in a rapidly developing specialty called pharmacogenomics.

"It's the study of your specific DNA, your genes, and how your body processes medicines," Shannon says. "We are right on the cusp of learning so much about the uniqueness of how to dose medicines and to choose medicines based on your DNA.

"For all of history, until recently, medicine has been a trial and error approach. You have high blood pressure or you have depression? Let's try this and see if this works. With pharmacogenomics, many people call it personalized medicine, we're able to know a lot more about the predictability of drugs based upon your specific genome. I think I will be the first in the area - outside of St. Jude and cancer chemotherapy - to offer this to the community."

Lloyd, an MD, is Divisional Medical Director for Methodist Alliance Home Care, which includes hospice, home health and home medical equipment divisions. He also has taught medicine for the past 16 years at Methodist University as part of the residency program for medical students and is an assistant at UTHSC in clinical medicine.

He has taken a road less traveled to reach this point. His family traveled the world with his father's various assignments with the U.S. Air Force. Lloyd got a business degree, studied hospitality management, became a nursing home administrator like his mother, ran a retail marine supply store in South Florida, published a short-lived magazine on the same topic, worked as a charter boat captain and did a radio talk show on fishing and boating.

At age 31, Lloyd decided to pursue his childhood dream of becoming a doctor.

"In my early adolescence, I had a bone disorder that was misdiagnosed for about a year, and by the time it was caught I was pretty much confined to a wheelchair," he recalls. "That was followed by a couple years of surgery and rehabilitation. That was my motivation to pursue a medical career. That was a very powerful experience as a young person, and it really formed me."

So at an age when many medical students already have become practicing physicians, Lloyd got busy raising his MCAT scores. American medical schools were looking for younger applicants with shinier resumes, but St. George's University School of Medicine in Grenada in the West Indies was a perfect fit.

That led to training programs in chest medicine in the National Health Service in London and a very marketable resume as a candidate for internal medicine residency programs in the U.S. where the specialty was in high demand.

"When I was applying for residencies, there would be $100 bills under my dinner plate and fruit baskets in my hotel room when I went to interview," Lloyd says. "Then I was invited to Memphis and I thought I'd just go eat some barbecue and listen to some music for a weekend and call it a day, but I fell in love with the place. Methodist was the most unique facility, they were friendly, they were real and I said I want to come here. Then my second week here I met Shannon and that sealed the deal."

Their Zup Medical (zup is Yiddish for soup) aims to be a one-stop shopping, upscale, on-demand concierge medical service. There will be no germ-filled waiting room, but instead electronic scheduling to allow patients to reserve an exam room with a relax-the-back recliner and a big-screen TV monitor on which patients can see everything from their records to X-rays to a doctor's-eye view of their throat while being examined. The clinic also will have a telemedicine platform so patients who get sick while on vacation can visit their doctor by video.

"After 40 years of combined practice," says Lloyd, "we've got a whole list of things that have made us a little bit crazy about medical practice, not just in Memphis but as a whole."

They're starting out small, with Shannon, Lloyd, several nurse practitioners, an X-ray technician, a nurse and a front-desk concierge. They also plan to offer opportunities for medical and pharmacy students "to think outside the box and help improve the health-care industry," says Shannon.

The clinic also will have a small dispensary, a full on-site laboratory, a treatment room and even a retail section so parents of sick children don't have to make an extra trip to a grocery store for things like Gatorade or ginger ale.

"We'll have some traditional therapies like ginger, or turmeric for your joints," says Lloyd, "and, of course, we'll have some chicken soup."