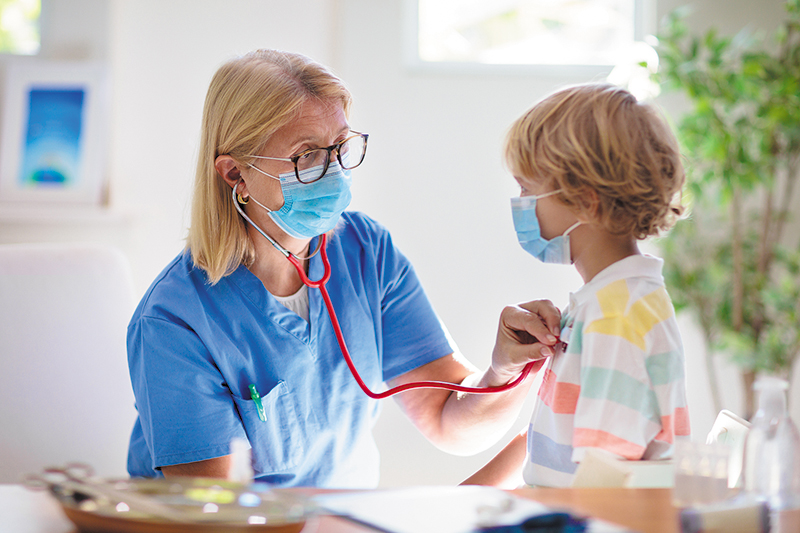 As summer break began, it seemed like the worst of the pandemic was behind us. After a tough year of virtual learning, parents, teachers and students were all eagerly looking forward to returning to the classroom in the fall. Unfortunately, the Delta variant has allowed COVID-19 to take root again, particularly in communities with lower vaccination rates, just in time for the new school year.

Decisions in Tennessee - from the firing of a vaccination official to fights over mask mandates - have made national news. While Gov. Bill Lee used an executive order under emergency powers to give parents a way to opt out of school mask mandates for their children, pediatric COVID rates hit new highs across the state.

On Aug. 19, there were more than 1,000 new cases of COVID-19 in children 10 and under and more than 1,800 new cases in the 11-20 age group. The day before, there were 2,500 new cases in the two youngest age groupings and 2,000 the day before that. In just that one three-day period, 7,300 young Tennesseans were confirmed to have the virus, with nearly 3,000 of them being age 10 or younger. Although serious illness and death remain relatively rare among minors, there has been an increase in such cases nationwide. Since the beginning of the year, the state has seen more than a 60 percent jump in hospitalizations in the age 0-10 category, a group not yet eligible for vaccinations.

As parents seek answers, pediatricians are stepping up to dispel myths and share the facts on vaccination efforts and mitigation measures.

Stuart Berger, MD, FAAP, chair of the Section of Cardiology and Cardiac Surgery for the American Academy of Pediatrics (AAP), spoke with Medical News to address multisystem inflammatory syndrome in children (MIS-C) and parent concerns over reports of myocarditis or pericarditis linked to vaccination in children 12 and up.

"There seems to be, indeed, an association with the MRNA vaccination and myocarditis. When it's seen, it's typically in the 16-24 age range and in boys more than girls," he noted.

"Having said that, it's still relatively uncommon to see it ... and when it is seen, it's very, very mild disease," Berger continued. He added the rare number of children who have been diagnosed haven't been very sick, and the inflammation has gone away fairly quickly. "Thus far, it has not required any treatment other than one to two days of pain management such as non-steroidal anti-inflammatory drugs." Typically, the self-limiting condition requires no intervention at all outside of rest and OTC pain relievers as needed.

"This is now in stark contrast with myocarditis that can be seen from an acute COVID infection or in association with MIS-C," explained Berger, who is the division head of Cardiology at the Ann & Robert H. Lurie Children's Hospital of Chicago. "Those patients can be very sick and often end up in the hospital and can get a very severe form of myocarditis requiring treatment and a fairly intense therapy for a period of time."

He added, "Many of those patients can require therapy in the Intensive Care Unit and can have morbidity and mortality if they get this." Berger said data is also being gathered on possible residual issues these children could face over the long term.

"In my experience with seeing COVID and MIS-C in young patients and my experience in seeing patients post-vaccine, it is a no-brainer to me that getting the vaccine is critical and what is best for every individual and for society in general," Berger concluded.

Anna Morad, MD, FAAP, president of the Tennessee Chapter of the American Academy of Pediatrics (TNAAP), said AAP guidelines call for masking children in the school setting. "We know a significant number won't be vaccinated," she said. "We have a fairly large population of unvaccinated teenagers, and the ones under age 12 aren't even eligible, yet." Therefore, she continued, "The bulk of people entering these schools will be unvaccinated."

Even if more were vaccinated, Morad pointed out most schools don't have a robust system in place to determine vaccination status. And evidence continues to mount that vaccinated individuals with breakthrough infections can spread the Delta variant more easily than initially thought. "It makes sense to provide that layered approach to mask everyone to protect vulnerable populations," she explained.

As important as it is to keep kids and teachers well, it's equally important to keep them in class. Many students had a tough time last year emotionally, socially and academically. Morad noted, "Kids do well with routine, and kids do well with having their peers around them." She also pointed out virtual learning has a disproportionate impact on kids who don't have reliable internet access or a parent who can be home during the day to help. "The most important thing we can do is get our kids back in school," she stated.

Without masks and other mitigation measures, in-person learning could quickly become another victim of the Delta surge. Within two weeks of returning to class, several districts in Georgia and Mississippi had already returned to remote learning. Florida's Hillsborough County, which includes Tampa, has already seen more than 10,000 students be isolated or sent home to quarantine. In Nashville, it took four days for 1,000 students to be sent home for the same reason.

Mask have become highly politicized, although Morad said they simply should be viewed as an effective, evidence-based strategy to prevent the spread of COVID-19. While parents have become incredibly passionate about their children's 'right' to be mask free, most kids aren't terribly bothered by wearing them. "Our experience is most students tolerate mask-wearing beautifully," she said.

Unfortunately, parental passion has boiled over at several heated school board meetings. TNAAP recently released a statement condemning violent rhetoric and aggressive actions towards medical providers following a Williamson County School Board meeting. In part, the statement read: "Everyone should step back and question if this is the behavior we want to model for our children. As parents, we teach our children to have calm conversations and to respect others. The healthcare professionals who attended the meeting were there to provide recommendations based on evidence-based guidelines to allow for in-person schooling while also keeping children healthy and safe."

The statement also said it's a false narrative to point to low death rates among children from COVID, and those arguments completely discount severe illness, rising hospitalizations, MIS-C, long-term health effects not yet fully understood, and transmission to other vulnerable populations at home or in the community. "The mortality rate for children is not as high as for adults," agreed Morad. "But these are children ... we should not be talking about mortality among children." She concluded, "No child deserves to have a vaccine-preventable disease because people around them refused to wear masks or get vaccinated."