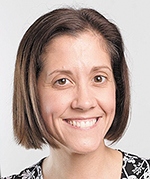 In March, President Donald Trump signed a massive $1.3 trillion omnibus spending bill into law to fund the federal government. Part of the spending package included a $414 million increase for Alzheimer's and dementia research funding at the National Institutes of Health (NIH).

Rachel Conant, senior director of Federal Affairs at the Alzheimer's Association, leads the organization's efforts to elevate Alzheimer's disease as a priority for the federal government. She also serves as senior political director of the Alzheimer's Impact Movement (AIM), which is the national association's advocacy arm.

Just days before the spending bill was signed, the Alzheimer's Association released a new report outlining the toll of the disease. "The 2018 Alzheimer's Disease Facts and Figures" found increases in prevalence, deaths and cost of care. An estimated 5.7 million Americans are living with Alzheimer's dementia in 2018, nearly two-thirds of Americans with Alzheimer's are women, 10 percent of those 65 and older have the disease, and the incidence rates are even higher in older African-Americans and Hispanics. Alzheimer's cases are expected to spike alongside the nation's aging population with an estimated 14 million living with the disease by 2050. Currently, someone in the United States develops Alzheimer's every 65 seconds. The Alzheimer's Association predicts by mid-century, someone will develop the disease every 33 seconds.

Although deaths from other major diseases have decreased, recorded deaths from Alzheimer's disease increased 123 percent between 2000 and 2015. The sixth leading cause of death, the new report stated Alzheimer's is the only one among the top 10 causes of death that cannot be prevented, cured, or significantly slowed.

In addition to the human toll, the financial cost is staggering. The 2018 Alzheimer's Association report cited a $277 billion cost to the nation for Alzheimer's and other dementias with a projection that those costs could rise to as much as $1.1 trillion by 2050. The current cost represents nearly a $20 billion increase over last year.

Conant noted that in 2011, landmark legislation laying the groundwork to create a national Alzheimer's strategy was signed into law. The National Alzheimer's Project Act (NAPA) created an advisory council to make recommendations to the Secretary of Health and Human Services in three key areas: research, clinical care, and long-term services and support.

"That was the first time we really saw the federal government put an emphasis on Alzheimer's funding and research," Conant said. She added with this latest $414 million NIH increase earmarked for Alzheimer's and dementia research, federal funding has now risen to $1.8 billion.

A great deal of work is being done to better understand the underlying mechanism of Alzheimer's and related dementias, and there are a number of promising drug trials underway that hope to stop or slow down disease progression. "We're really excited about the focus not only on treatment but on prevention," said Conant.

"We just announced the 2018 launch of the Pointer Study, which is a two-year clinical trial to look at multifactorial and lifestyle interventions to prevent cognitive decline and dementia," she continued. The intervention methods will include exercise, nutritional counseling, cognitive and social stimulation, and improved self-management of health conditions. For more information, go online to alz.org/us-pointer.

Also included in the omnibus bill was funding for Kevin and Avonte's Law, bipartisan legislation to protect seniors with dementia and children with developmental disabilities who are prone to wander. Conant said AIM has spent several years working on the bill, which reauthorizes the Missing Americans Alert Program through fiscal year 2022 and expands the program to include those with developmental disabilities.

Introduced by Reps. Chris Smith (R-NJ) and Maxine Waters (D-Calif.) in the House and Sens. Chuck Grassley (R-Iowa) and Amy Klobuchar (D-Minn.) in the Senate, the new law provides up to $2 million in grants each year to state and local agencies for programs to prevent wandering or locate missing individuals.

Yet another legislative win for the Alzheimer's Association and AIM came earlier this year with passage of the Recognize, Assist, Include, Support, and Engage (RAISE) Family Caregivers Act.

"From the Alzheimer's perspective, we know there are more than 15 million caregivers providing unpaid care to individuals," said Conant. The 2018 Facts and Figures report estimated these individuals provide 18.4 billion hours of care valued at over $232 billion. Research has shown caregivers of people with dementia report higher levels of stress, depression and worse health outcomes than those caring for individuals without dementia. In 2017, these additional stressors led to Alzheimer's caregivers incurring an extra $10.9 billion in health costs.

Sens. Susan Collins (R-Maine) and Tammy Baldwin (D-Wis.) and Reps. Gregg Harper (R-Miss.) and Kathy Castor (D-Fla.) introduced the bipartisan legislation. The new law directs the Department of Health and Human Services to develop a national strategy to provide education and training, long-term services and supports, and financial stability and security for caregivers.

Conant said her organization worked closely with AARP to push for passage of RAISE, which was modeled off of NAPA. "It will require a plan to be updated annually," Conant said. "It's also going to create a National Family Caregiving Council to provide recommendations to the (HHS) Secretary."

Conant said the Health Outcomes, Planning and Education (HOPE) for Alzheimer's Act that passed in November 2016 provides a funding mechanism for providers to be reimbursed for assessing and discussing a diagnosis of Alzheimer's disease and available treatment and support options to improve or maintain quality of life.

"Beginning in 2017 for the first time, people living with Alzheimer's now have access to care planning with a medical professional, and it's paid for by Medicare," she said, adding the Alzheimer's Association has a downloadable care planning toolkit for providers. For more information, go online to alz.org/careplanning.

"The goal is to prevent or effectively treat Alzheimer's by 2025," said Conant. "We're excited about our progress, but we know we have a long way to go."