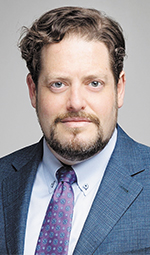 Adam S. Arthur, MD, MPH, has been named chair of the Department of Neurosurgery in the College of Medicine at the University of Tennessee Health Science Center.

In joining the executive leadership of the UTHSC College of Medicine, Dr. Arthur said he plans to continue to work to improve patient care, to increase his focus on educating the next generation of neurosurgeons, and to build clinical research.

A 1998 graduate of the University of Virginia School of Medicine, Dr. Arthur did his internship in general surgery at the University of Utah, where he also received a master's degree in public health and completed his residency in neurosurgery. He completed fellowships in interventional neuroradiology and cerebrovascular neurosurgery at UTHSC and the Semmes Murphey Neurologic and Spine Clinic in 2006.

Initially, neurosurgery was not his first choice in medical school, Arthur said. However, from an early age, he had been interested in how things work. He became interested in the neurosciences as he grew older, primarily to understand "why and how we are what we are," he said.

Arthur is a member of numerous surgical, neurological, and neurosurgical societies and organizations. He is chair of the Annual Meeting Committee for the 2022 Annual Meeting in Philadelphia of the American Association of Neurological Surgeons. He has held visiting professorships at numerous universities, including New York University, the Cleveland Clinic, and the University of Southern California.

A funded researcher, Dr. Arthur has given 140 invited lectures, made 42 peer-reviewed presentations, written 20 books and book chapters and more than 230 peer-reviewed journal articles.