A Match Made in the Maternity Ward 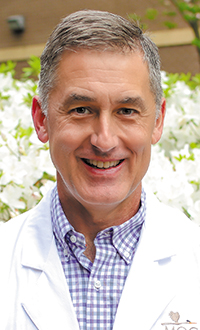 MOGA Evolved After These Two Doctors Handled an Emergency

Doctors play a significant role in the lives of their patients with every visit, every surgical procedure, every diagnosis and every treatment plan.

Doctor and patient hope for a positive outcome, and when that is achieved it's moving on with life; moving on to another patient's care. But more often than anyone likely realizes, patients can play a significant, lasting role in the lives of the doctors who care for them - or who unwittingly play matchmaker in a time of crisis and high drama.

"It was 1991 and I was a brand-new intern for overnight calls in the OB service at The Med, and during the night a patient arrived by ambulance in what was one of those true medical emergencies, like one you might see on a TV show," Dr. Aric Giddens recalled. "The patient was in labor and there was an umbilical cord prolapse, and this third-year resident looked at me and said 'Go scrub.' I told her OK, though I'd never done a C-section. It was a very dramatic moment.

"We verified that the baby was alive, and then this resident did an incredibly fast C-section. I was very impressed because everyone else was running around and yet she was very calm and collected. I thought, 'That's how you do it. That's the kind of doctor I want to be.' Anyway, we started talking, we started dating and we got married."

And that's how Dr. Aric Gus Giddens and Dr. Mary Andrea Giddens became life partners and partners at Memphis Obstetrics & Gynecological Association (MOGA). Thanks to a very pregnant woman in distress. (They also now have three children of their own.)

"I'm from Cochran, Georgia, and I was always interested in science," he said. "My parents ran a small business, and I knew I didn't want to do that because it was too much work. I was always a good student, and I thought maybe I'll just be a doctor because no one in our family had done that. It was just totally blind, really. I didn't have any close friends who were doctors, and I barely knew any doctors.

"I knew I wanted to do something professional and be successful. My parents always said, 'You can do this. Whatever you want to do, just do your best and be successful.' Emory was very hard and I was from a small public high school, but I was very determined and I was not going to bail out. I decided if I chose to do something else, it would be my choice and not someone else's."

"So I did an OB rotation and really enjoyed that," Dr. Giddens recalled. "You had the positivity of participating in the pregnancy and delivery, which is almost always a good thing, and then from the surgical side you got to fix things. Our patients are generally pretty healthy and on the younger side, versus internal medicine or surgery, and that really appealed to me.

So I wound up in Memphis at UTHSC due to the (residency) match and met my wife and that's where we are now."

MOGA has four offices, with locations on Humphreys Boulevard in East Memphis, Stage Road in Bartlett, Poplar Avenue in Germantown and on Airways in Southaven in DeSoto County, Mississippi. Dr. Giddens has been with MOGA 24 years, and things seem to have gotten more challenging over time.

"It's not just the practice of medicine now, it's more the understanding of the business aspect of it for which you get zero training in medical school and residency," he said. "It's kind of learn-on-the-job things. What's become more and more important is the payment model's shift toward value-based care and pay-for-performance versus pay-for-service type of contracts with insurance companies and government payers. That's made it a lot more difficult."

But some areas of technology that have been the bane of doctors' offices nationwide - such as electronic medical records, standardized medical care and virtual medical records - may be turning the corner and showing actual benefits for doctors and patients alike.

"I'm also president of the medical staff at Baptist Memorial Hospital for Women, and they've done a great job using this technology and letting their medical staff know that we can do this and make it really easy to do the right thing," Dr. Giddens said.

"We have a standardized way of caring for certain things and giving alerts for certain high-risk conditions based on certain parameters. That's been a long time coming.

"Also, we're the only group in the areas that's gotten an award from Cigna four years in a row for meeting their quality and cost metrics at providing value care."

He notes that patients today require a higher degree of acuity because patients present more issues such as diabetes, hypertension, obesity and challenges associated with delaying the child-bearing years. There also is a push in the practice to reduce the number of C-sections. Another change is in the gender population of the OB-GYN doctors themselves.

When Dr. Giddens was in his residency, the field was 75 to 80 percent male. Today female physicians are in the majority, he said. The gender makeup at MOGA is about 50-50.

"I certainly think that's the wave of the future, that the OB-GYN field is predominantly female," he said. "When I first started practicing, I think me being male was neither a positive nor a negative with patients. I think there are a lot of women now who would prefer to see a woman, but I'm at a stage in my career where I see a lot of my patients' daughters. That's kind of nice because they trust me and they convey their trust to their daughters."

Seven years after obstetrics residents Andrea and Aric Giddens met, fell in love and got married after teaming up for an emergency C-section in 1991, that same patient walked into MOGA for OB care, only this time not in such distress. The patient relayed the story of her emergency C-section delivery of her first baby at The Med and indicated she wanted to have a natural delivery with no drama. So Dr. Andrea got the patient's medical records, stared hard at them and then handed them to Dr. Aric and said, "Look at this."

It was the same patient.

"The lady had no idea who delivered her first baby because the residents' names were not recorded on the birth certificates; only the staff doctor's was," Dr. Aric said. "So we told the patient, 'Hey, we've got a good story for you.' She was really amazed, she delivered again and she's been our patient ever since. In 2016 we even got to see her son we had delivered 25 years earlier.

"Now, every time she sees my wife she says 'I'm the reason you got married.' We're just amazed at the odds that this lady found us and had no idea, but it really happened."