A Burn Surgeon Who Knows How It Feels 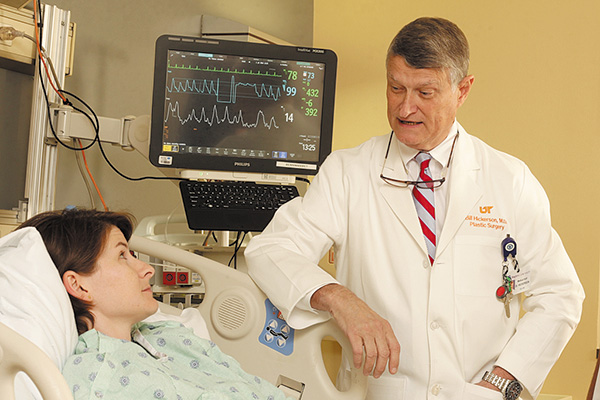 William Hickerson, above, has been medical director of the Firefighters Burn Center for more than two decades.

It's a pretty safe bet that when William Hickerson's children were young, no fireworks were lit around their house on the Fourth of July. Not even sparklers.

Hickerson, MD, is medical director of the Firefighters Burn Center at Regional One Health. As a boy growing up in Nashville, he was badly burned when his shirt caught fire as he walked by the electric stove where his grandmother was boiling water.

He suffered roughly a 20 percent total body surface area burn and missed a couple of months of school in seventh grade. When asked if that incident played into his decision to become a plastic surgeon in a burn center, he said, "I think it did."

On the other hand, after some more contemplation, he suggested he might have chosen this career regardless, simply because he finds it so rewarding.

After graduating from the University of Tennessee at Knoxville with a degree in cell biology and a focus on English, Dr. Hickerson was accepted into medical school at UT in Memphis. On the ride to Memphis, his father asked him what kind of doctor he wanted to be.

"I put myself through school in Knoxville as an orderly, and I said the one thing I'm not going to be is a surgeon because they're always in the hospital," Dr. Hickerson said. "He kind of laughed at me, and as I went through medical school, I realized surgeons were the ones always having fun. They got to do things; see immediate results.

"When I started my general surgery residency, plastic surgery was just starting to take off, with doing myocutaneous flaps and free tissue transfers. That was intriguing, and I could be obsessive compulsive and put something back together after it'd been torn up. That was a lot of fun."

After five years in general surgery and then a plastic surgery residency, Dr. Hickerson had a conversation with Dr. James W. Pate and Dr. Louis G. Britt, who were heads of the general surgery program, "and they asked me why I was going into plastics since I enjoyed general surgery so much. I told them because I wanted to open a burn center and be the first plastic surgeon who was full-time staff at the university.

"Dr. Pate said, 'We'll let you be the first full-time plastic surgeon if you can convince somebody to build a burn center for you.' So that kind of laid down the gauntlet and I went to work and was fortunate enough to get the hospital's CEO, Gary Shorb, to say that he'd do that, and then we went from there. It was my idea, my conception, and I birthed it and ran with it."

Dr. Hickerson finished his plastic surgery residency on June 30, 1985, and the burn center opened 15 days later. From day one, he was medical director. He left for stints in Augusta, Georgia, and Little Rock between 2001 and 2011, and then returned to Memphis to resume his role as medical director at the Firefighters Burn Center.

"We were fortunate that the hospital we're in, now called Regional One, which was The Med at that time, decided they'd take a risk on a burn center," he said.

Originally a six-bed facility, the burn center moved into its new building in 1993 and then expanded to 14 beds.

"Burn care is a lot different now," Dr. Hickerson said. "Basically at the time I sustained my burn they went through a process called auto debridement, which meant that the burns got infected and you could just remove the dead tissue, and the bacteria helped you get rid of a lot of that. Then they would go in and clean everything up and take you back to dressing changes that were basically four times a day with wet to dry dressings, pulling off any debris that was left. Then back to surgery for skin grafts.

"Now we do things a lot diffently. When I had my burn (as a child), a 30 percent burn had a high mortality rate. Nowadays, I just got through operating on one of our 80 percent burns who has very little left to do - probably one more surgery, two at most, before we have all of his coverage. We start early, we excise all the dead tissue, we utilize the skin they have, and we use skin substitutes that are available now."

Pig skin was an early skin substitute, then Biobrane, Integra and PriMatrix.

"Now we also have BTM, a new product called Polarity, cultured epithelial autografts, which are test tube skin, all of these things that we can draw upon and find the combinations that we need," Dr. Hickerson said.

The number of burn centers in the country has been declining rather than increasing, in part because of the cost of running a burn center and a shortage of burn surgeons.

"The training now is such that general surgeons do not have to have burn training," the doctor said. "So someone has to decide they're crazy enough to take care of these very sick individuals. From a burn center standpoint, if it's not done right and the payer mix is not appropriate, it can be a huge drain on the hospital."

Being a burn surgeon is hard, demanding work. They work long hours in ORs that need to be kept warm because burn patients can't maintain their own temperature. Although Dr. Hickerson no longer wears one because he's become accustomed to the warmth, some burn surgeons wear ice vests.

"But what you get to see with what you do is people getting better," he said. "You do have those who don't survive. Sometimes those that you're pulling for the hardest don't make it."

The last thing Dr. Hickerson needed to see was one of his family members in a burn unit. Thus the ban on home fireworks.

"We always went to see professional fireworks," he said. "We get to be on the receiving end of too many of those. Sparklers, which everyone thinks are just great for kids, burn at 1,200 to 1,500 degrees. So that is a disaster waiting to happen. It's not unusual to see bottle rockets gone astray, or people shooting roman candles at each other."

"Holidays are not holidays for burn centers," he said.